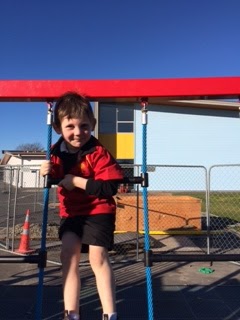 The playground…where all best tidbits are learnt.

“Why do kids say damn it?”  Milo’s question came from the back of the car as I was negotiating a road detour.

“What was that?”  I pulled my attention back from the road and focused on my son.  I wanted to make sure I had heard him correctly.  He’s only five, but he did start public school recently.

“Why do kids say “Damn It”? he repeated.

“Well, to “Damn” something means to send it to hell, so people say that when they’re frustrated….”  I’ve been pretty lax on my religious education, being uncertain of my own doctrine most of the time, and I don’t think we have had this discussion before.  “Milo, do you know what Hell is?”

“No,” he says.  My mind goes forward and backward, over the old familiar “Hell is an awful place where you go when you die if you’ve been bad in your life,” to “Hell is where you go if you don’t ask Jesus to forgive you for your sins,” to “Hell is complete separation from God.”  I’m guessing the last explanation is not going to be very motivational to him.  We’ve passed churches in the past and he’s asked what they’re for.  “They’re where people go to learn about God.  Would you want to do that?”  “No,” he said definitively.  Alright then.

I went with the first explanation.  Even as I say it the scriptures are reverberating in my memory. “All have sinned and fallen short of the glory of God…”  “….it is the gift of God, not by works, that no one should boast….”  “…they will be judged according to their actions…”  Clearly actions matter.  Clearly no one is sinless.  There must be a process for redemption, involving Jesus dying.  Damn it!  I obviously haven’t sorted this out in my own mind yet.

“But Milo, saying “Damn” is considered very rude in our language, and we don’t use that word.  You can think of more creative ways to express yourself.  People who swear haven’t learned more interesting words to say how they feel.”  I was struggling, and starting to babble.  Something forbidden has a strong allure.  How can I make swearing seem unattractive, while still encouraging the expression of strong feelings?

“Mom, why is the road closed?”  Ah, onto the next subject, for the time being.