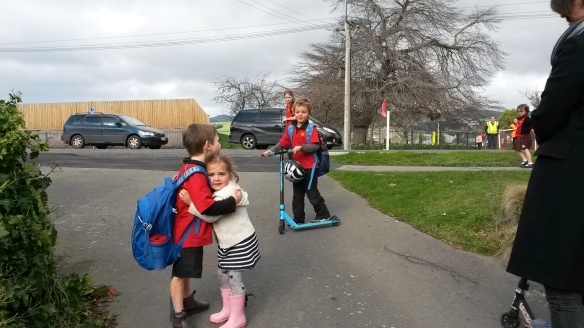 Milo seems to be entering a new era of independence. Along with making his own breakfasts, he has been walking himself home from school as well. You should have seen the expression on his face the first day he tried it–I’d call it radiant.  His buddy Ash (on the blue scooter) walks with him, and us moms wait at the end of our driveway for the boys to make their way around the school grounds. It’s a bit like I dreamed it would be when we moved into this house across the street from the school….except I had envisaged Naomi napping and mommy having some quiet time before Milo’s return.  Ah well, Naomi does make a lovely welcoming committee. 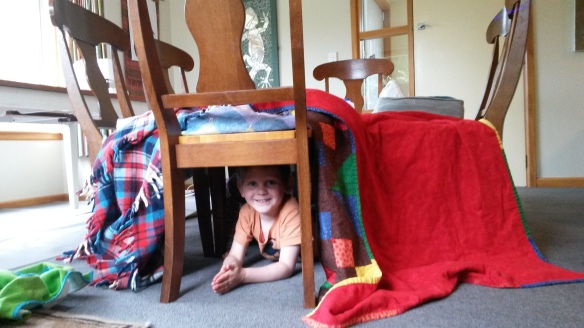 Milo spent an hour on Sunday morning building this fort, weighing the blankets down with milk jugs (still full of milk). He was quite proud of the outcome, insisting he had made it big enough for me to squeeze in as well. Hum. I explained that Mommy’s hips aren’t quite as narrow as his, but I stuck my shoulders in to try it out. I used to love fort building too.

Naomi had her own friend over this morning, a new era for her. The girls played quietly with a game while I sewed. Then the giggles turned to whispers and the whispers to silence, and I thought I had best investigate. The trail led to an open pantry cupboard and two pairs of little pink socks hiding behind the chair. They were sneaking granola bars. Could be worse!