The ingredients for a dude weekend seem pretty simple–blood, blokes, and beer, with maybe a fire and a few sand flies thrown in.

The weekend was originally planned as a “stag do” (i.e. bachelor party) or Mark, and there were great expectations of rafting and helicoptering to remote hunting spots.  But Mark’s work kept promising to send him to America or a few weeks around the beginning of October, then changing their mind, then changing again….and the ground was too unstable for a helicopter reservation.

Sooooo, the super-duper stag do was postponed (I’m told it was NOT substituted), and the consolation weekend was three days fishing in the canals at Twizel.  Because, after all that, Mark is still with us in NZ.

The canals are an impressive series of water channels from dams at the ends of the great glacier lakes on the eastern side of the Alps to hydro power plants. NZ gets 50-60% of their electricity from hydro schemes.
Well, now if you’ve got vast quantities of fast flowing pristine cold water, what else is that good for? Enterprising farmers started salmon farms. Now where is the best salmon fishing in the country? Right next to the salmon nets, which occasionally break. 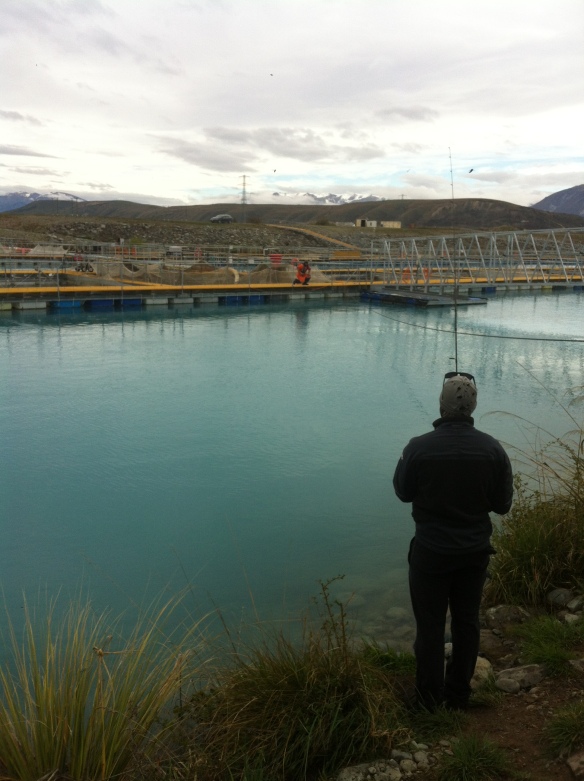 Sometimes the tackle is thrown so close to the salmon farm that it gets snagged in the fence. In this case a wonderfully sympathetic worker unsnagged the hook and released the lure right where Mark wanted it.

“Whew, that’s it’s real weight, mate. I ain’t touching the net!” The men admire a 20 lb fish, a trout in this case. The rainbow trout have decided that right under the salmon nets is pretty good pickings, so it was mostly trout that they caught this weekend. Massive fat trout, probably the couch potatoes of the trout world. 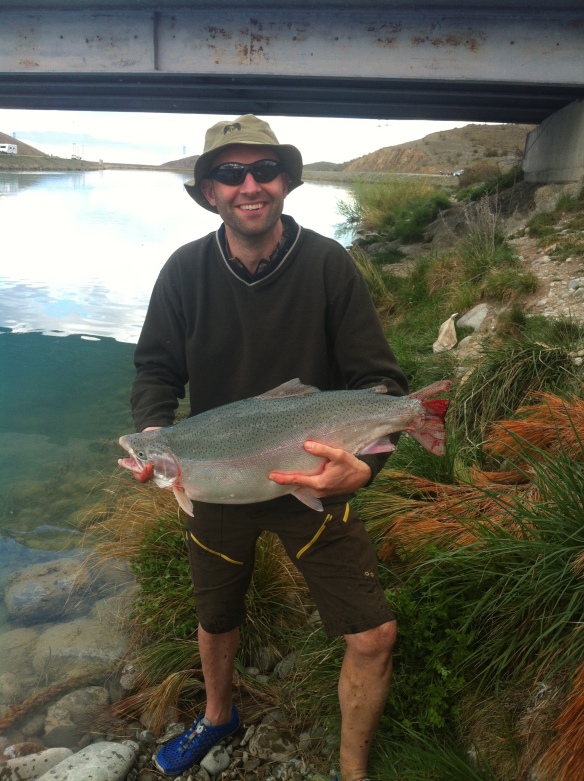 Yet another man hugging a fish, but this one wants to get away. Mark. 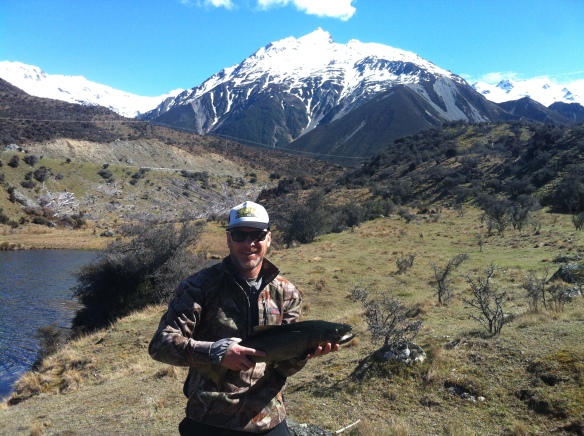 Fourth and final Man Holding Fish shot. This one is a brown trout from a high country lake that Ben got fly fishing.

To round off the weekend, here’s a quintessential Kiwi scene. Cattle stopping traffic on the state highway.  What better way to get from here to there than to use the road?