“Hey, do you think there would be a lake house somewhere near Chicago where we could go for a week?”  We were in the planning phase of our trip, trying to figure out a Hub Harro, and come up with a vacation plan that would be fun for all involved.

“Chicago is on Lake Michigan, honey,” my mom reminded me.

In the end my parents found a house to rent on Diamond Lake, about an hour southwest of Kalamazoo, not the big water of Lake Michigan but a warmer, tamer lake surrounded by vacation homes.  My three sisters made arrangements to come, and my uncle, aunt, and cousin from Chicago came for the weekend as well. A regular family reunion! 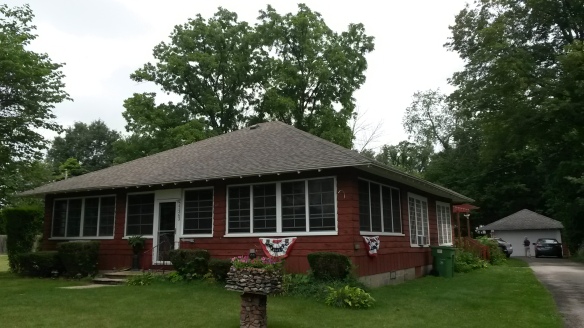 The house was a sprawling lake cottage, built in the 1800s and added on to ever since, a comfortable wood-paneled abode (with wifi and Netflix!), with nooks and crannies for everyone. 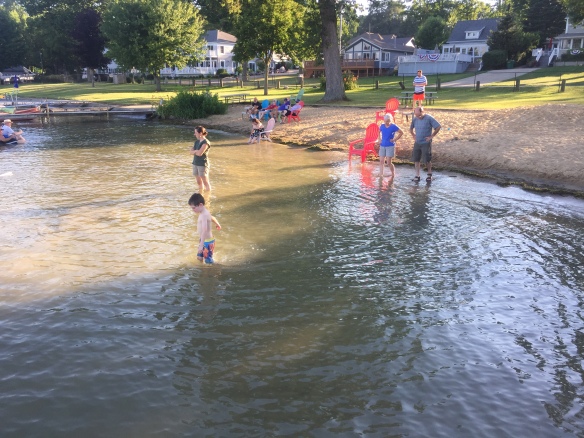 A short walk down the road was the shared beach, warm and safe for kids.

We had told Milo not to bring his soccer ball to America, that surely Aunt Becky would have one, so imagine the dismay when we woke up on our first morning in warm summery America and we couldn’t find a ball to kick around. Easy fix for that, suburbia has plentiful shopping. The Diamond Lake house had a generous expanse of grass for lawn games.

Big Lake Michigan was less than an hour away, so we took a couple day trips there. I love the sand dunes near the lake. I have great memories of jumping down sand dunes in my younger years, and though my back wasn’t giving me leeway to do much besides hobble, I still like the mountains of sand we had to slog through to get to the water.

The Harro family always pockets a ball to toss on the beach, a tradition I need to rekindle with our little family. “Woof!” 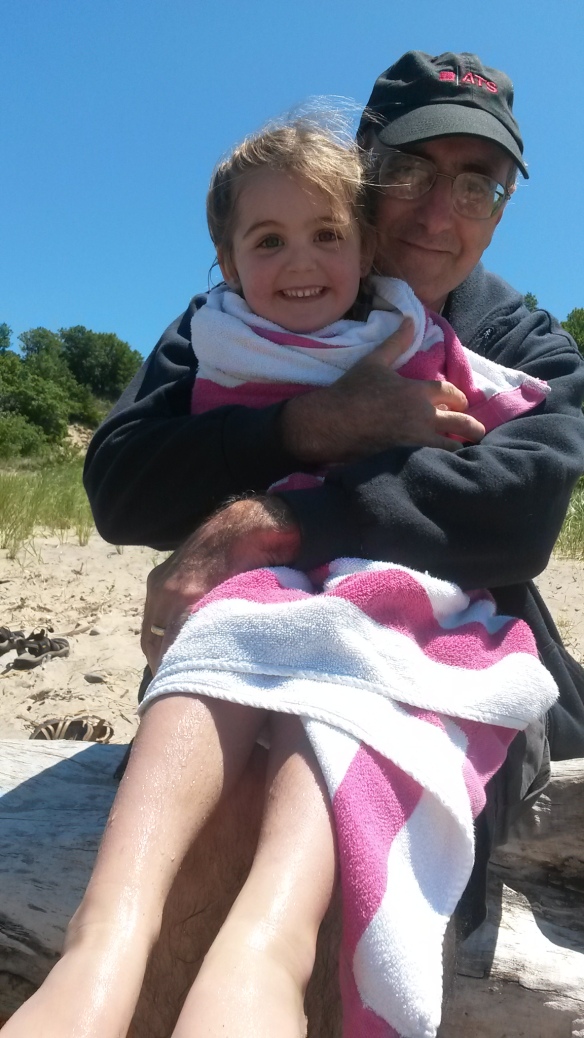 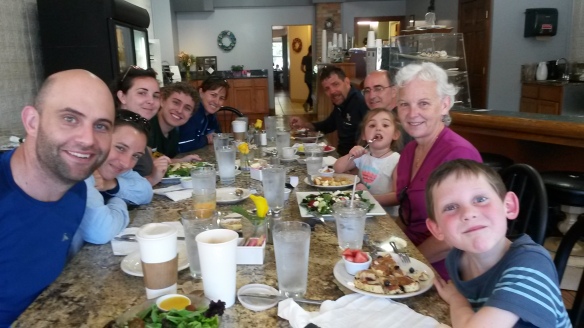 Down there at the end of the table is my uncle Ted, Aunt Gretchen, and cousin Duncan. They treated us all to lunch at this fantastic little cafe, after our play at Lake Michigan. We used to call Uncle Ted “Uncle Visa.” In my younger years, he was one of the uncles who would splurge for treats, and pay with his credit card. Those were the days when my parents, ever slow to adopt technology, still budgeted in cash, and we assumed paying with plastic was reckless. I have this distinct childhood memory of going with him to the grocery store to buy ice cream, analyzing the prices for half gallons, and advising him which was the cheapest. “Yes, but this one is the BEST,” he said, reaching for some fancy creation in a round pint container, and flashing his Visa at the cashier.  Quality matters.  Good life lesson, Uncle Ted, thanks! 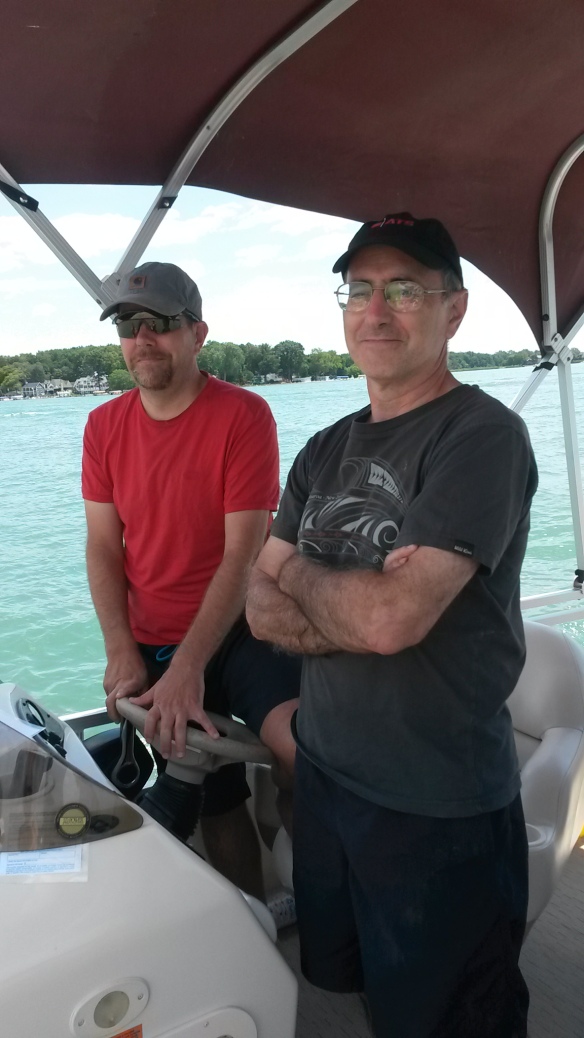 The day after our Lake Michigan trip Uncle Ted rented a party boat on Diamond Lake–it fit all of us simultaneously! Captain and first mate there. 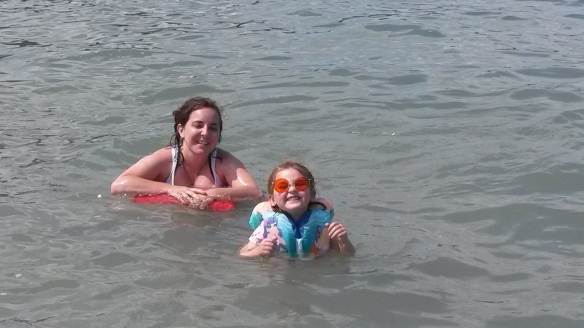 There was a shallow section of the lake where boats anchored and swimmers jumped out into the warm water. Naomi fell in love with Aunt Kelsey’s sun glasses. 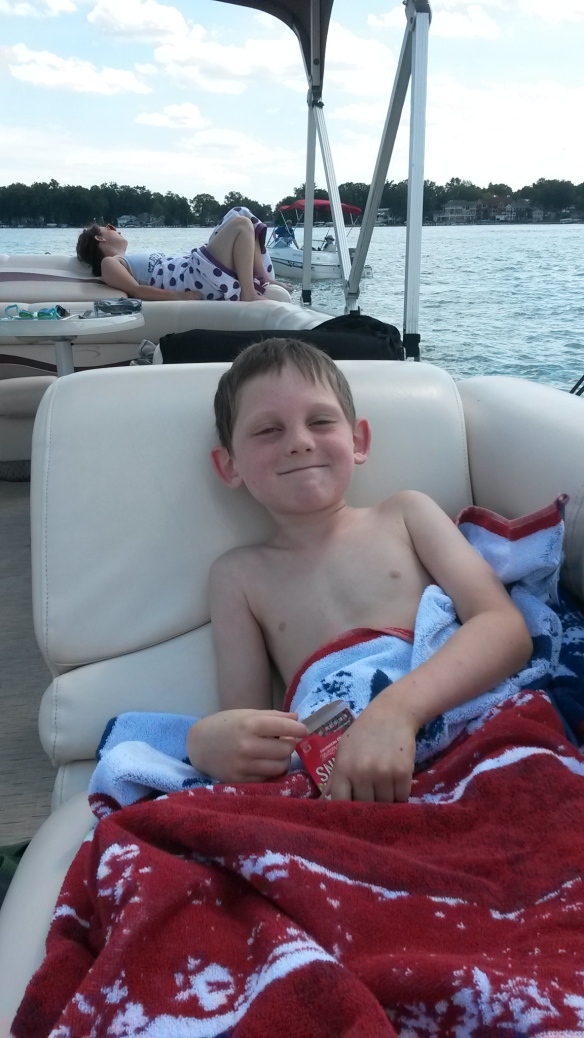 Milo turned out to be quite the tepid swimmer. He complained of being hot when we first arrived in America (head plus humidity is something new to him), then had no tolerance of even mild water chilliness. So he lounged on deck, surveying the rabble below.

After that first sunny weekend we had quite a fair bit of rain while we were there. Warm rain, gentle with no wind, very different than we get in New Zealand.

We did puzzles, read books, and watched DVD’s of James Herriot, TV shows from the 1980s. We all knew the stories and how they were going to end, as we’ve read the books and seen the shows countless times before, but that doesn’t diminish our enjoyment….another peculiarity of the Harro clan.

One morning Rebecca and I took the kids to a little local playground, dodging the rain drops.

Those grain elevators make a bit of an unusual backdrop for a playground.

S’mores in all their gooey glory.

We had a couple beer tasting opportunities, much to Jeremiah’s delight. The craft brewery scene seems to be doing well in the States.

Our 12th anniversary rolled around while we were there, and we went to Bell Brewery in Kalamazoo to try a flight of their beer.

The owner of Bell Brewery has collected paraphernalia from all over the world to decorate the pub. That Wedding Ale was one of my favorites–it had honey in it and you actually tasted the honey in every sip. 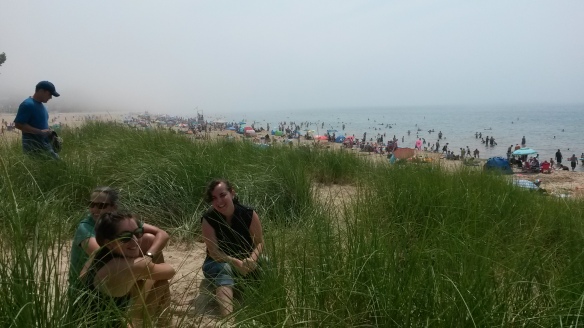 We went to Lake Michigan another afternoon, this time to a town beach (hence the crowds). It was the strangest weather I’ve ever seen–fog off the lake, but very hot out. Almost like steam. It was bizarre. 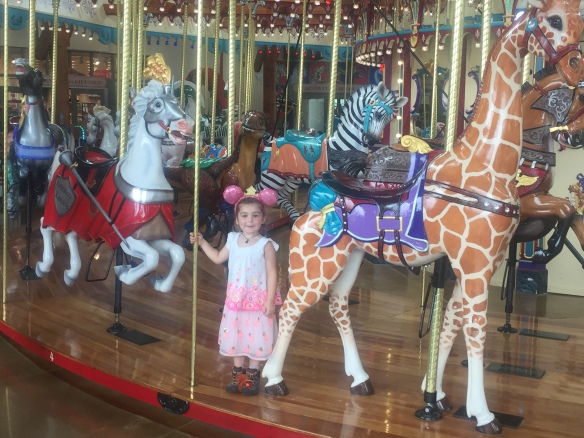 There’s a carousel at this beach, and ice cream stores…and we visited both.

There are few things that I miss about America, besides family. On this trip I was reminded about fireflies. They’re fantastic. This picture doesn’t do them justice, of course, but imagine a grassy field at dusk alive with gently fluorescing dots gently streaking around. And that’s completely normal, a part of every warm summer evening. Sorry NZ glow worms, you’re out-shone.