We’ve had two days of strong southerly rains in Christchurch, making me think with sympathy of the emperor penguin dads huddled in the dark on the antarctic ice, where the weather system originated. This morning a hard frost covered the garden but the sky itself was clear. NZ is a commonwealth country, and, God Bless the Queen, we had Monday off today.

We refurbished some old pairs of gaiters and waterproof pants for the kids, and headed for the white hills.

“How much longer until we get to the snow?” Naomi wasn’t thrilled with riding in the car fully clothed in her outdoor gear. “We’re not sure, hun, we’re just going to drive until we get to snow deep enough for sledding.”

We reached playable snow by lake Lyndon, so we peeled off the main road and drove a little bit around the lake to a mostly smooth hill that didn’t end at the road or pricker bushes.  The snow was crusty and our flimsy plastic sleds weren’t up to the task, but we turned them around and rode them backwards after the fronts had broken apart.

The highlight of the day wasn’t actually sledding, it was building. As the sun spent time on the snow it became a bit more malleable, and we could cut building chunks. Naomi is posing, but the wind break was really Milo’s project.

Yesterday someone else had been up there and built a major igloo out of snow blocks, most of which was still intact.

Jeremiah occupied the igloo much of the day, making hot chocolate and doling out sandwiches.  The wind was brisk and inside the fort was much more cozy than outside. 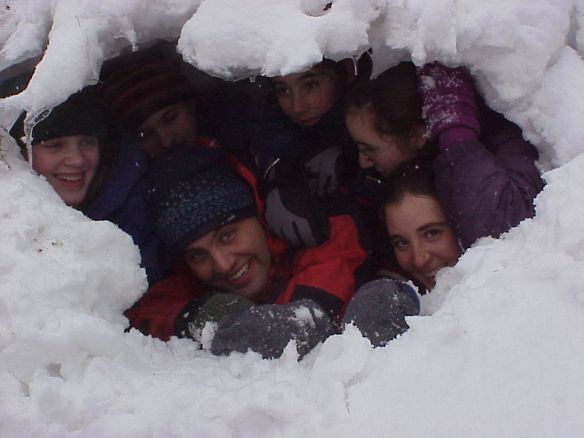 Our dear friend Mr. Kennedy has recently shared some photos from our childhood, and among them was this one, a snow cave we made at Sunnymeade circa 2002. The top layer of girls is Jennifer, Sarah, Susanna and Rebecca. 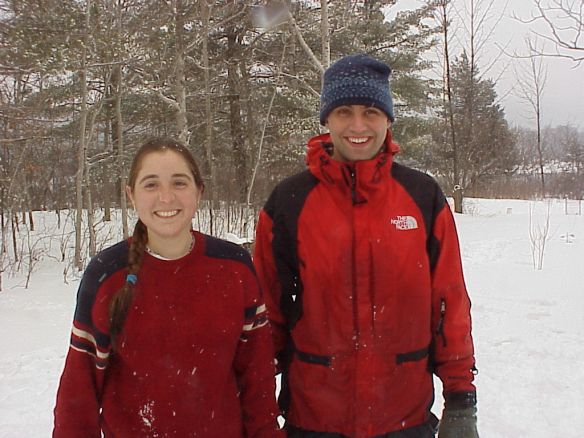 Another ancient picture of a pair of cheesy grins, just for sh__s and giggles. Today I strapped on my snowshoes and trudged up the hill, eliciting a friendly comment from a woman that “I must be from somewhere cold.” She had never seen snow shoes before. Yep, there’s much fun to be had in the snow.

2 thoughts on “Transformed by white”