Does anyone remember that kids’ song?  I don’t have any illusions about our kittens having as many lives as the adventurer of song, but nevertheless, they came back.

More precisely, they never really left.  Mommy cat just moved her brood to a different corner of the garage, to a box out of Milo’s reach.  Jeremiah noticed the mother leaving the garage one day about a week after they moved out of the bike trailer, put two and two together, and found the kittens after a little gentle rummaging. 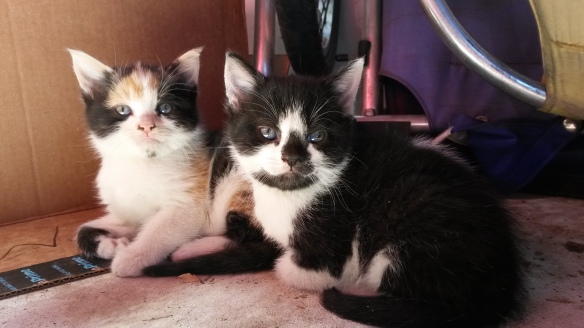 I kept them a secret from the kids for a couple weeks, checking on them sneakily…”I’ll be right back, kids, I just need to…get some meat from the freezer.”  I didn’t trust Milo to keep his hands off of them.

The Brotherhood went hunting one weekend and came back with a fine haul, which they cut up and packaged in our garage.  Mark has a soft spot for animals (don’t even try to figure out that oxymoron—hunter AND animal lover??), and he set aside scraps for the mama cat.  She was HUNGRY.  Deer, goat, pig; she relished it all.

It wasn’t too long after that when we had a friend over and I wanted to show them the kittens, but unfortunately Milo had just returned home from school.  I had a peak at them anyway, and their cover was blown.  But it seems that the mama (whom I’ve christened Genevieve, Jenny for short) tolerates more handling of her babies now that they’re older and sturdier.

All last week the kittens were clambering over the tower of boxes, Jenny sitting by, alert but apparently unconcerned about them toppling to their harm.  In the last couple days they’ve moved their residence down one shelf to Jeremiah’s dive gear bag, where they sleep when they’re not batting leaves around the floor or swatting strings hanging off the stroller.  Kittens really are wonderfully playful, and Jenny is wonderfully serene about their antics.  Somehow they don’t stray beyond her comfort zone, but if we take one out of the invisible boundary, she stalks along, keeping vigilant watch.  Good mommy.

Now that the kittens are a bit older Jenny must be going back to her old house to eat…or so I assume because she turns up her nose to venison now, and she’s fleshed out a bit.  I’m guessing the kittens were born about the first of October, which would make them something like 6 weeks old.  I hope they stay with us yet a while.