It was technically November 14th when the latest big earthquake hit New Zealand, but being just past midnight the date wasn’t so salient in my mind.  “Wow, that’s a rolly one, and it is lasting a long time” I thought, then turned over and went back to sleep.

Anyone who had lived through the Canterbury quakes did NOT turn over and go back to sleep.  Their fear triggers are jumpy, and those near the coast wondered about a tsunami….then packed bags and evacuated when the tsunami sirens sounded.

Those with more earthquake finesse than me recognized that the rocking-rolling nature of the shaking meant the fault that moved wasn’t under Christchurch–quakes centered nearby tend to be more jarring, more of a slap bang than a rock and roll.  A few of the more astute observes wondered if the long-overdue alpine fault had gone.

It turns out that the quake was centered about 130 kilometers north of Christchurch near the small coastal town of Kaikoura. 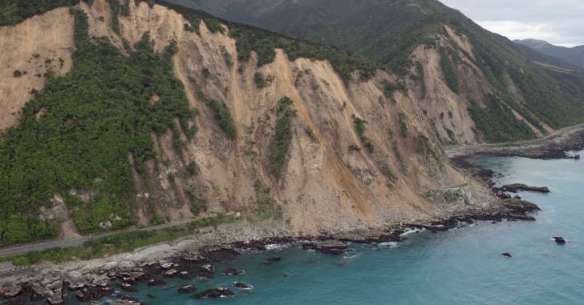 There’s a scenic road that runs along the east coast of the south island called Route 1. It’s a state “highway,” believe it or not, and a major trucking route. Jeremiah and I have a philosophical disagreement over the longevity of this road. I think it’ll fall into the ocean within the next few 100s of years, whereas Jeremiah has more faith in the engineering prowess of humans and thinks that we’ll keep fixing it. Optimist versus pessimist. I wonder how long it’ll take to fix it this time.

more road distruction. Amazingly, no vehicles were squished. The advantage of a midnight quake, perhaps.

The tectonic plate on the Australian side is sliding under the plate on the east side of New Zealand, uplifting the southern alps, as well as parts of the coastline. Kaikoura has had big uplifts in the past, as the various “shelves” you can see on the coastal walkway attest. This time we got another one–one report said there were areas where it popped up 6 meters! (that’s nearly 20 feet) That will certainly be a nasty surprise for resident paua.

That trucker got lucky!