School Holidays….ah.  The joy of kid-dom, but the bane of working parents.

However, this time I organized with some friends to do a kid swap for the three weeks after Christmas vacation and before school starts (here I pat myself on the back smugly for my astute forethought and dexterous planning).  This meant that I had three extra kids on Tuesdays, while they had mine on Mondays and Wednesdays, an arrangement that mostly covered my working days.

To my surprise, I’ve really enjoyed these few weeks.  My kids are happily occupied with playmates over on Tuesdays.  I still get a break from the family by going to work. And I still get Thursdays to do special things with both of my kids.  The day light is long and I’ve had time to do a few bike rides in the evenings.  Simple pleasures of life. 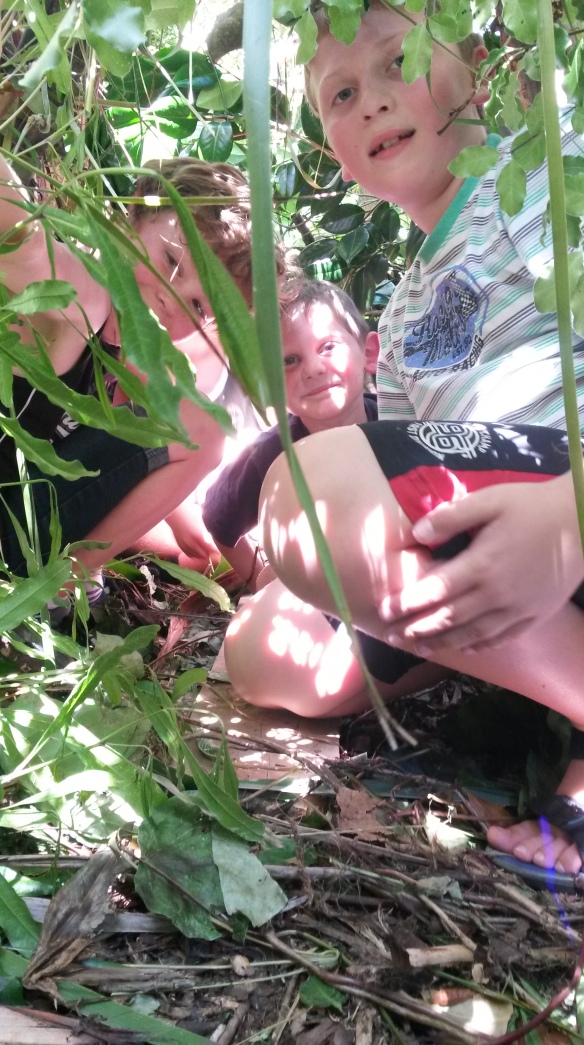 The Kid Swap boys were occupied for two full days building a fort in the bushes. Thank God for a wild green yard with overgrown giant camellia bushes–it’s super for kids, and unusual in the city. 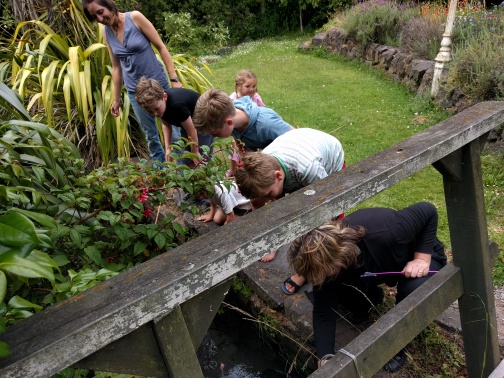 When the fort-building wore thin we moved on to eel catching. What boy can resist the delight of having a writhing wriggling eel thrashing on the end of his fishing line? What mommy can resist, for that matter? We tied bits of meat to the line, no hooks involved, so eventually the eels fell off…and it’s a good thing. I shutter to think about removing a hook from an eel’s toothy mouth.

One hot afternoon after work we made hats in the fort bushes, just enjoying the lack of goose bumps even in the shade. The mosquitoes enjoyed the easy access afforded by our summer attire as well.

One blustery afternoon we went to Clip-n-Climb, Christchurch’s indoor kids’ climbing wall. it’s a neat place, set up with self-retracting climbing ropes and brightly decorated walls. Both kids were bold and capable. I take it for granted and complain about their independent streaks that surface at the most inconvenient moments (“Come ON, Naomi, can I just buckle your shoes for you, we’ve got to get GOING!”), but at times I have to appreciate their spunk.

Naomi didn’t want to put on that harness at first, but it took about three seconds watching her brother climb before she was itching to join.

I suspect that having an older brother makes Naomi a resilient individual. Yes, he’s brandishing something above her head, and she’s still smiling charmingly. Something about adversity being the mother of invention?? Or was that necessity?? Well, overcoming the daily challenge of living with Milo does seem to be a necessary adversity with which she’s coping well.

Speaking of which, I’ve been coping with Milo better as of late as well.  I’ve discovered the obvious; that when a person is held in contempt, they aren’t very motivated to behaving charmingly.  Milo has the perverse habit of intentionally acting naughty when he’s bored, to get attention (or so I presume).  He finds the getting-ready-to-go-out process boring and by the time he’s buckled into the car on the way to whatever pleasant kid-centered activity I’ve planned for the day, I’m generally sick of the sight and sound (and even thought!) of him.  His disgusting behavior makes me feel a failure as a mother and offended as any abused human will feel.  If I can heave a gusty sigh and FORGIVE him his impudence and speak to him as if I still like him (which at that instant I most certainly DO NOT), he will start afresh and be the lovely capable boy he can, at times, be.  The rest of the day is likely to go great, and if the hiccups are forgotten quickly, the relapses of bad attitude are likely to be short, and I can, genuinely, enjoy my boy.

The Buskers Festival has been on the last couple weekends, and we went to see some of the street performers. They are extraordinary people, not primarily for their acrobatic skill, but because they are shameless hustlers, bold entertainers, and I just can’t stop wondering what they’re like as real people.

The Buskers were performing in the city center, where there still exist pay phones, in the old English style. Naomi didn’t recognize it as a phone, as she has only ever seen a flat picture-taking device that fits in a pocket. Cheese! Take a photo for posterity! 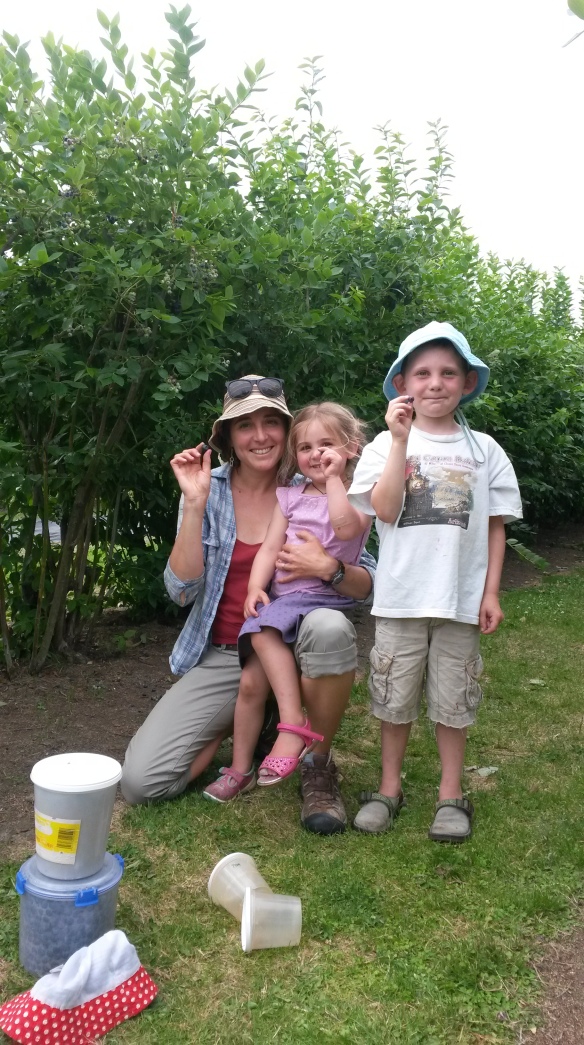 Also on the weekend docket was some blueberry picking. We’ve been back to this blueberry farm every year we’ve lived in Christchurch. The blueberry season is extraordinarily long, I think primarily because the summer isn’t super hot so the berries ripen more slowly than the furious pace of ripening in NY berry patch.

A day at home means enough time to set up a sour dough loaf to rise for dinner, and Naomi was an enthusiastic helper. After that she asked for our home-made bread by requesting “the bread what has flour in it.” 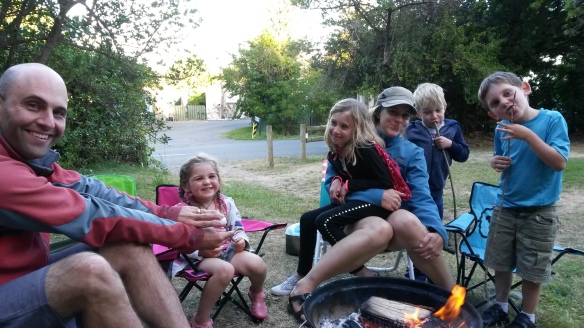 Summer means beach weekends and barbecues. Jeremiah enthusiastically chars meat on our portable grill wherever we go. In this case we’re camping at Gore Bay with our friends Laura, Audrey and Noah.

In this case we’ve wound our way out to Tumbledown Bay on the Banks Peninsula for a day at the beach in all its sandy glory.

We made a frog…

And then a “snow” man (in honor of the northern hemisphere winter), both of which were enthusiastically destroyed moments after their photo was taken.

The muddy tidal pools are the warmest ones, Naomi discovered. 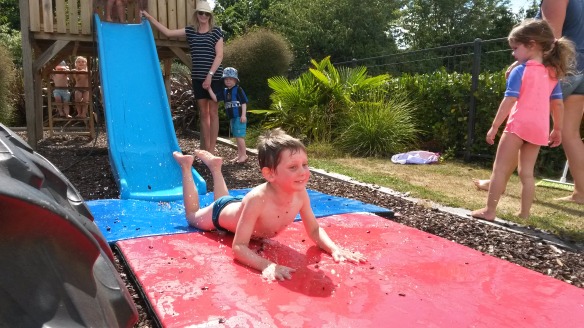 Today playcentre was back on for Naomi but Milo’s school hadn’t yet started, so big brother came back to playcentre. A hot day, we made a water slide, fantastic fun for all.

Grins and giggles! Hurray for summer, and may the wonderful warmth last yet a while longer!

1 thought on “In the closing days of the school break…”