Usually a rainy weekend forecast strikes dread into my soul.

That might sound a tad melodramatic, but a rainy weekend with everyone home means the kids will move from room to room strewing lego and dirty socks in their wake.  They will move to join me in any room I occupy, even if that’s the bathroom. They will be constantly hungry and no matter how often I wipe counters, there will be more crumbs.  I’ll sit down on the couch with the laptop and Naomi will sit on top of me and make a constant stream of jabber.  Jeremiah will ask me what I want to do and I won’t have any acceptable answers.  Milo will stamp around and call everyone in sight a poo bum, and my failure as a mother will paralyze any ounce of creativity I might have brought to the task.  I’ll end up picking up around the house all day because at least that never-ending job doesn’t require concentration and solitude, and by 8:00 I’m ready to go to bed and call it quits.

But this rainy weekend is different!  The kids aren’t any better and the rain isn’t any less wet, but the context is different.  Rain puts out fire.

We’re so thankful for the rain!

The fire on the port hills started Monday night–we heard the fire engines wailing past the house while we ate dinner. On Tuesday morning we surveyed the plume of dense grey smoke moving up the dry hillsides, and cursed the warm norwest wind that drove it on. By Wednesday the wind turned easterly and turned the blaze back down towards the hillside suburbs. 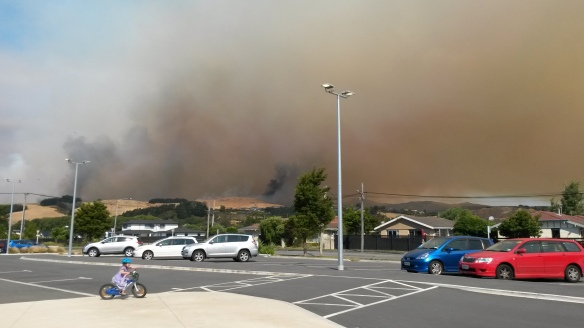 Every so often the wall of flames would eat into something new, sending up billows of black smoke. There were a dozen helicopters with monsoon buckets busily scooping water and dumping it on the blaze, but helicopters are really small compared to a bush fire, reminding us that we might think we have control over our environment…. but we don’t.

On Wednesday night I packed our passports and toothbrushes, and put my rollerblades into the car.  Silly, those rollerblades, I know, but some emotional part of me wanted them to be safe.  If we had to evacuate during the wee hours I figured we’d grab the kids and their quilts and a few granola bars, and go.  Jeremiah said I was being foolish, that the fire wouldn’t get down this far, but he added the box with birth certificates to the pile.

He was right.  Over night the earth movers must have turned the tide, and the by morning the billows of smoke had turned to smoldering wisps all over the hillside.  A day of busy attention from the helicopters and the pace of advance was controlled.  We were all glad to see the rain move in on Friday, even though the firefighters said it made visibility tough.

1800 hectares of ground were burned, several houses were lost, and one of the helicopters crashed, killing the pilot.  Monday is set to be hot and windy again, and we hope the firemen have put out all the hot spots before that happens.

In the mean time, hurray for the rain.

1 thought on “When a rainy weekend is GOOD”