“On Guard!” Don’t mess with the hooligans, they clearly mean business.
We spent last weekend with the Trick-Pendle family at Dommett “Lodge,” a traditional Kiwi bach on farm land in Kurow, in rolling hills south of Christchurch by about 4 hours. The kids spent the entire weekend happily killing each other with nerf guns. “I got you in the heart, you’re dead!” “Missed me, only got my leg!” Better them than me; I have absolutely no tolerance for being shot at, even in pretend.

The bach is on a private farm, which you access on a four-wheel drive road past a locked gate. I brought my new spiffy mountain bike and biked in from the gate. The day we arrived was thick fog and I couldn’t see anything, let alone how long it was to the top of the hill. But the next two days cleared up.

Emma and Ian have a real four-wheel-drive truck, but our Rav4 made it ok.

Because the weather was so foggy we spent the first afternoon shooting at a wine box target from the front porch of the bach. Emma and Ian are English, so they haven’t had a lot of experience with firearms; shooting a gun was a real novelty.

The bach was a rustic affair; pieced together from relics of other homes, the side of the house you see here is made of a garage door–open at this moment in time.  Thankfully the sand flies weren’t bad.  The wall in one bedroom even had an electrical outlet–not connected to anything (as the thirteen-year-old video game addict found out when he tried plugging in his tablet).  The true bach style does mean you don’t have to be too precious about the carpet.

There’s a “kitchen” inside, but that’s just a sink (with hot running water!), so we did all our cooking on the grill on the porch. 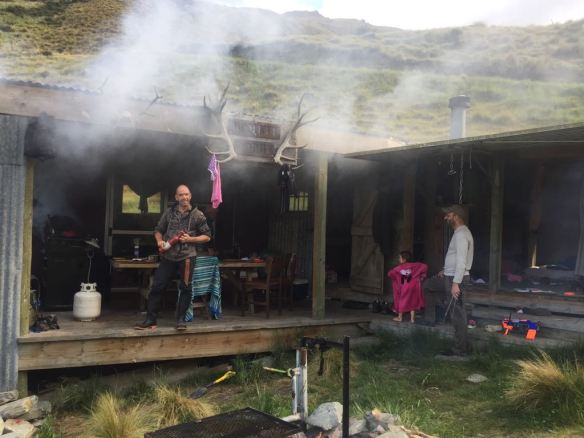 We nearly burned the place down when the grease trap caught on fire!  Notice the fire extinguisher Ian is proudly holding–we used it.

Ian’s goal for the weekend was to build a dam on the little creek that runs past the bach.

Dam builders in action! The small creek was perfect–low enough that you don’t have to worry at all about the kids, but wet enough for water play. Had the weather been warmer I think we would have spent more time in the creek.

As it was, we spent a bit of time in the hot tubs. It was misting that first night and I don’t like getting my face rained on, so I pulled out the umbrella, much to the amusement of the others. Makes perfect sense to me.

The valley with the gravelly river is where the bach is situated, and the second day I took a bike ride up a four-wheel-drive road to this saddle.

From there I walked up to the next knob and squinted at the view.

But I admired the tough little alpine flowers hunkered down among the tussocks even more. 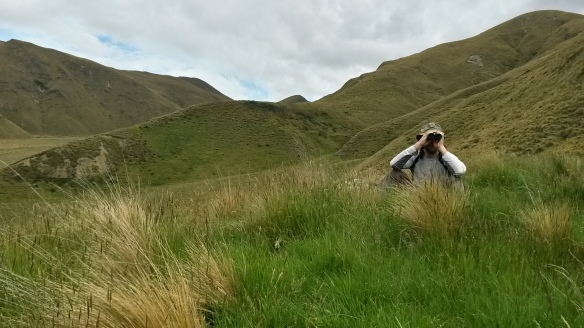 Jeremiah did a little hunting on the station, but despite the lush grass he didn’t see any deer except one on the neighbor’s property, which we were strictly warned not to touch.

“Bring me back a hare,” were Emma’s parting words. So when Jeremiah saw the telltale ears poking up among the grass he took the opportunity. The kids were fascinated.

Ian was fascinated too. On the right are the hare legs wrapped in bacon (the ones that set the grease trap on fire!).

The kids liked the hare, but they liked the marshmallows even better. What makes a good marshmallow stick in a country without trees? Speargrass.

When the kids get along well it makes for a good weekend for the grown ups too.