Her brows are lowered, glowering.  Her lower lip is thrust out, railing against a reality that’s standing in her way.  She’s expressing a full-on scowly pout.

Close, but not exactly.  I’m ashamed to admit that’s me.  That apple doesn’t fall far from the tree.

It’s amazing how visceral the bodily reaction is, how perfectly I mirror my daughter’s expression.  It gives me more sympathy for her plight.  How often is her autonomy has been threatened or her will thwarted?  Kids often get told that their plans are rubbish, or not well thought out, or needing adjustment….wherever along the spectrum of positivity the parent happens to be that day; it all means they don’t get to do what they want.  I know what that’s like.

I had planned a hike last weekend with a friend, but on Thursday the text came: “I’m still snotty and grotty with a cold that just won’t go away.  Sorry for the late notice, but I was hoping it would disappear….”

But the forecast was superb for the mountains, and I like hiking alone.  I was still keen to go.  I was definitely NOT keen to stay home.  “I’m hell-bent on going hiking this weekend!” I declared to Jeremiah.  I’m practicing clear spousal communication, can you tell?  He cocked his brow at the rashness of my decision.

The only problem is that we hadn’t decided where we were going to go, and it was Thursday night, and I hate trip planning…..which unfortunately is part of any trip. Sigh.

I looked at Pfiefer bivvy, working out if I was gutsy enough to find my own way up a creek bed, over a trail-less ridge, and down a scree run.  Maybe not this weekend.

Then I noticed Mt Aiken on the map.  I had been wanting to hike that one for a while now, and the calm wind and sunny forecast made it a tempting prospect.

“How far is it?” Jeremiah queried.

“I don’t know….it’s a day hike.  Starts right at Punchbowl Falls, and splits off from there.”

Jeremiah scrutinized the map.  “That ridge looks a little narrow,” he noted, zooming in on the aerial.  “It might be icy.”  He checked the forecast.  “25 kph wind,” he announced.  “That doesn’t sound very nice.”  His critical view was discouraging.  That’s when my involuntary glower started.  “Well, ‘hell-bent’ as you are on hiking, I think you might get up there and make a bad decision,” he stated, my hyperbole coming back to bite me.

I stared at the laptop screen.  Maps.  I toggled between the aerial view and the topo map, struggling to figure out which were the ridges and which were the valleys.  Ach.  I poured us a beer to see if that would help.  It didn’t, so I went back to the comfortingly tangible job of pulling together hiking food.

Jeremiah started looking at other routes.  Unlike for me, maps are his friends.  “How about Mt Bealey,” he suggested, showing me the features.  There was a big shallow bowl behind the ridge that would make a decent alternative route if the ridge proved to be too sketchy.

Reluctantly I considered it.  I’d feel rather foolish if I got into trouble on a route that I had insisted on taking against my husband’s advice, I was forced to admit.  But I think I can decide for myself when a climb is becoming unsafe, and turn back.  Darn.  Caution and frustrating rationality were winning over autonomy and spontaneity, as always, and I resigned myself to taking Jeremiah’s suggestion.

Thankfully we already owned a good topo map of Arthur’s pass, so I quickly finished tossing my stuff in my backpack and went to bed.

It was sunny by the time I arrived in Arthur’s pass the next morning.  Cold, but a steep climb soon fixed that.  I heard a kea’s screechy call, and admired the long waterfalls coming off the snow-capped peaks.  The route description had said that there was no other safe way down this side than the ridge, and looking at the bluffs, I believed it.

Popping out of the trees, I could see the road far below, and hear the train’s whistle.  Not exactly back country, but the views were panoramic nevertheless.  I climbed through the tussock and reached the first bit of the rocky ridge.  The drop down to the right was a startlingly steep scree slope, so I kept left as much as possible.  Patches of snow began to appear, but they were soft and safe in the sun.  I reached a high point after a cautiously poking my way along a cornice, comfortingly solid under my stick.  I checked my phone—reception, and data too.  I sent Jeremiah a text.  “I’m on the small peak before bealey, going well.  I’m going to tootle along a bit more and check out the next ridge.”  I might as well keep him updated, he was probably afraid of being left to raise two young kids on his own. 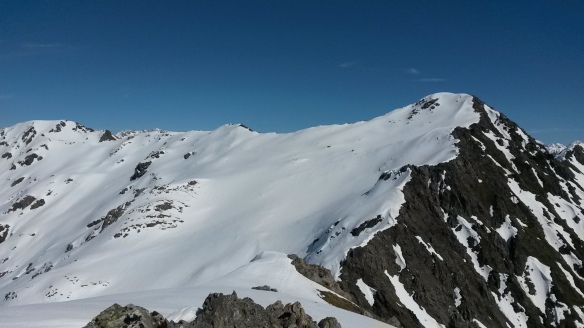 I didn’t like that next ridge, as it turns out, so I backtracked a bit, stopped to put on my microspikes and went down and across the big white clean expanse of the bowl behind the ridge. I could see old tracks where someone had gone down on skis, and tracks of a lone hare, but otherwise it was clear and bright, the deep snow smoothing out all the rocks and grass and streams. It’s amazing, gliding along the crusty top of the snow—like what I imagine moon walking to be, but in a much more hospitable environment.

Part way up the next side I put on my snow shoes, climbing a bit of softer snow tipped towards the afternoon sun. It was lunch time when I popped up to the last ridge and trudged up to the summit. The view was exhilarating. Avalanche peak was there to the west, with Mt Rolleston glimmering behind it. In the summer I’m going to come back to the valley beyond Avalanche and walk out the Waimakariri valley I could see below to the south. 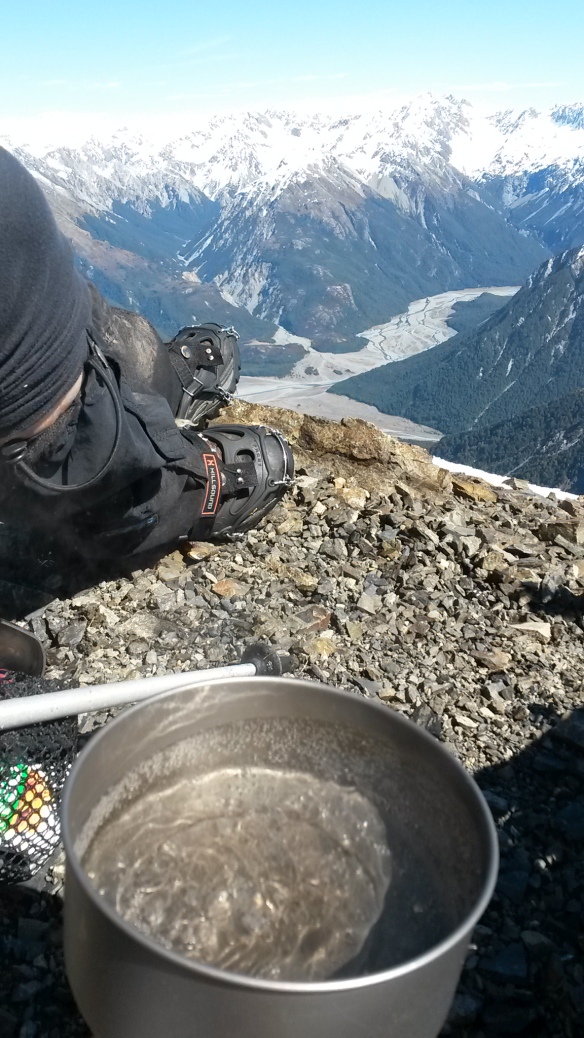 Tea time with the Waimakariri river far below.

On the way back down I gazed at Mt Aiken to the north across the valley where Arthur’s Pass village hunkered.  The rocks on the ridge line looked dry, with the snow in the shadier side just behind and below the ridge.  It had only taken me half a day to reach the summit of Mt Bealey; maybe tomorrow there would be time to try Mt Aiken. 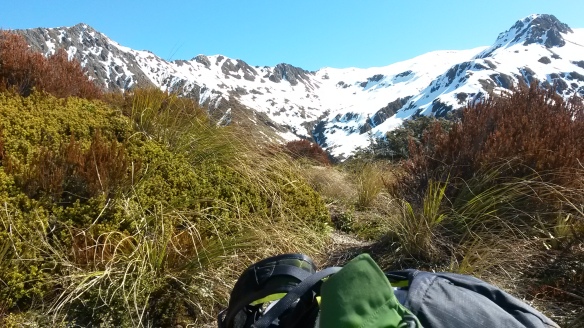 It was before 2:00 when I reached the tree line again, and stopped for afternoon coffee. I was carrying that stove and gas can, I might as well use it to the max! The village below was already in the mountain shadow, so I decided to stay put for a while. I had phone reception, so I caught up on messages, thought about life, and lounged in the sun for nearly two hours before finishing the descent through the trees.

I stayed in the Alpine Club’s lodge Saturday night.  “Lodge” makes it sound fancy, but it’s not; more like a rough bach.  Passable and cheap.

Next morning I started up Mt Aiken. It was windy and chilly in the village, but as I climbed it got still.  Odd, but maybe the wind is funnelled over the pass and maybe the trail was sheltered by the mountain to the west?  Anyway, I wasn’t complaining.  I heard another kea.

This climb had less snow than the previous day, as the slope was facing the sun.  The ridge was dry, and wide enough to feel safe from the scree fall to the west and the snowy slope to the east.  These ridges are jagged, the mountain rock being easy to fracture and break apart, not smooth like the hard granite of the Adirondacks.

I picked my way cautiously over the ridgeline, even putting on my spikes for the snow on the last 5 meters before the first summit. A band of cloud hung just over the mountains to the west; I was on the east side of the divide, in the sun, while anyone just over in Otira would be swathed in cloud. I laughed out loud. It was spectacular, it wasn’t even windy, and no one else was up here! 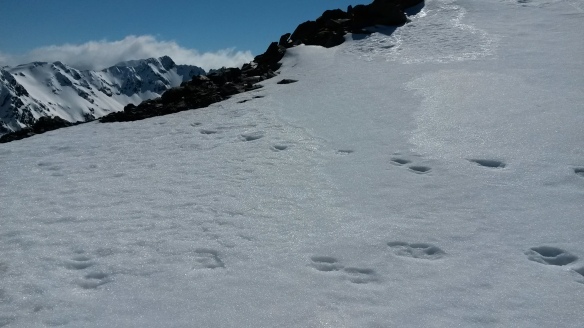 Except a pair of tahr. Or chamois…or deer. I’m really not knowledgeable enough to guess who’s footprints these were, or why they were sidling along the mountain tops.

I looked along the next bit of ridge to the true summit, eyeing up a narrow spot where the snow had blown through the ridge and the possible falls to either side.  Nope, first summit was enough for me.  Jeremiah would be proud of that conservative choice.  I turned around and started back down. 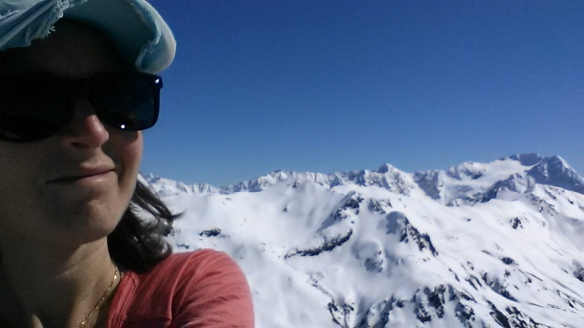 It was a magnificent weekend. Enough risk to make me feel strong and independent, while not enough danger to be stupid. And it was surprisingly nice to be front country—to have time to communicate with some friends and also to think.