At the end of May we moved house.  It was just a move around the block, essentially, but now we own the house instead of rent.  Ok, technically the BANK owns most of the house….but we can install lights and closet shelving, even move around walls if we wanted to (not that we’re in that phase of life at the moment).

We had been house hunting for about two years.  It’s a discouraging process, full of lousy expensive houses, failed attempts at purchases, and compromises that we didn’t want to make.  In the end we have a smaller yard than we ever thought we’d cope with, but it’s chocker with garden and well screened from neighbors by plants.  The windows face the sun (a significant source of heat in a NZ winter), and it’s walkable to school.  Oh, and we can afford it.

Jeremiah wanted more land.  Milo wanted to be closer to school.  Naomi is generally happy, and so am I.

We moved at the perfect time, just before three weeks of cold grey wet weather, the type of winter weather where I used to test to see if my breath was visible indoors at the other house.

Rather than introduce you to the house itself, which is a rather unexciting modern three bedroom (though very functional and practical), let me showcase the garden.  We moved in the dead of winter, so the garden was mostly dormant or heading that way.  Spring has turned it into a botanical treasure hunt.

Forgive me if a wax a bit poetic. 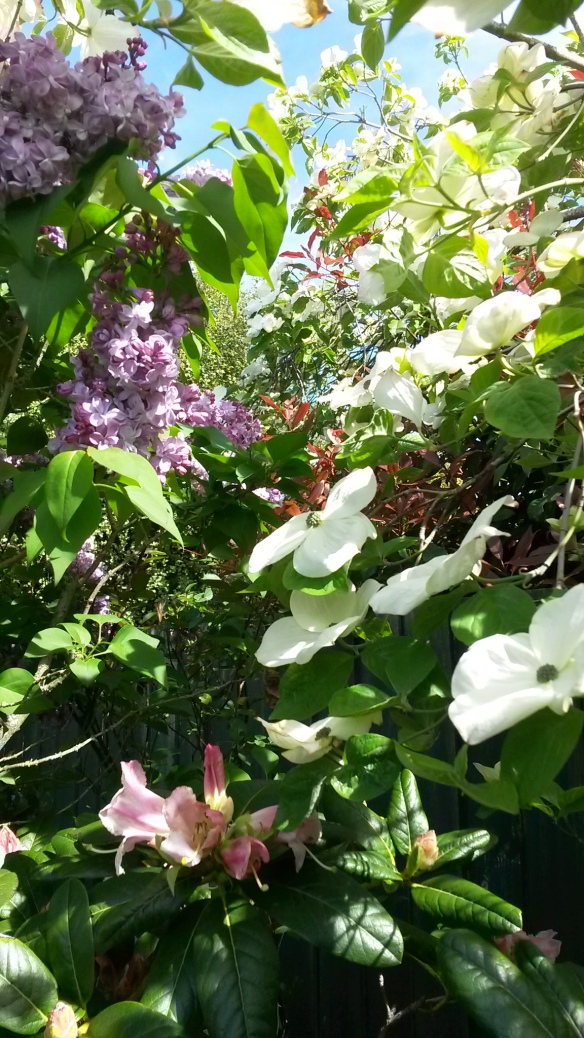 There are old friends—the bare bushy branches have leafed out into a lilac and a dogwood, transporting me back to New York springs of my youth. The rhododendrons ae starting to open their flowers now, and I remember my grandparents’ massive bushes they could see from their kitchen window, with the myrtle underneath. 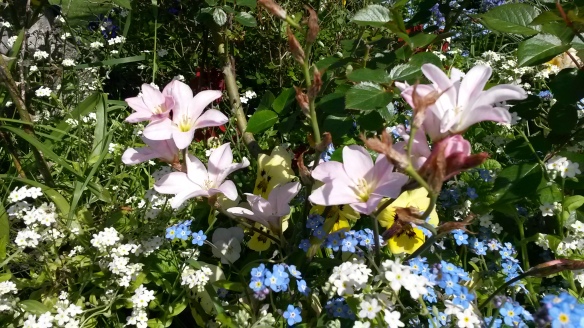 Every bare patch of soil has been colonized by forget-me-nots, which remind me of how my mom used to shake the drying seed pods over her own garden to inoculate it for the spring to come.  Then there’s a lemon tree, just to remind me that I’m NOT in NY.

And freesias of various colors, which seem very exotic. 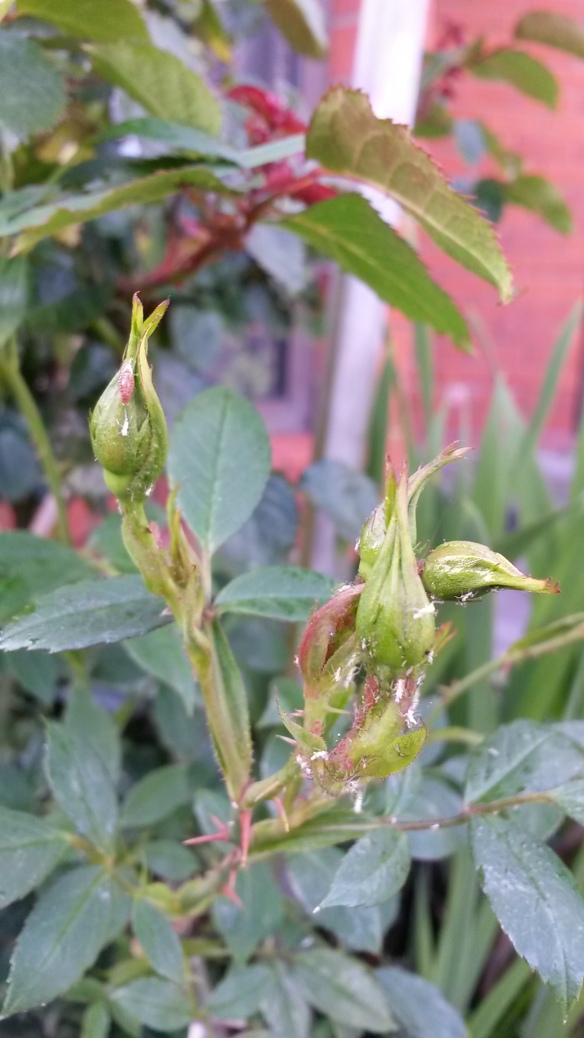 There are frumpy finnicky plants that probably won’t stand my laissez faire style of gardening. To heck with those standard roses with their mean thorns and healthy aphid colonies. Of course they haven’t bloomed yet, I do reserve the right to adjust my attitude in future.

There’s a magnolia, like on the cover of my university biology book. It came out white, to my disappointment—who would plant white when they could have pink?

And there are various other plants that I don’t know. These fantastic sprigs of red berries make a tapestry window behind our bed, and seem to last all year.

These lipstick pink sprigs are sure to be Naomi’s favorites. 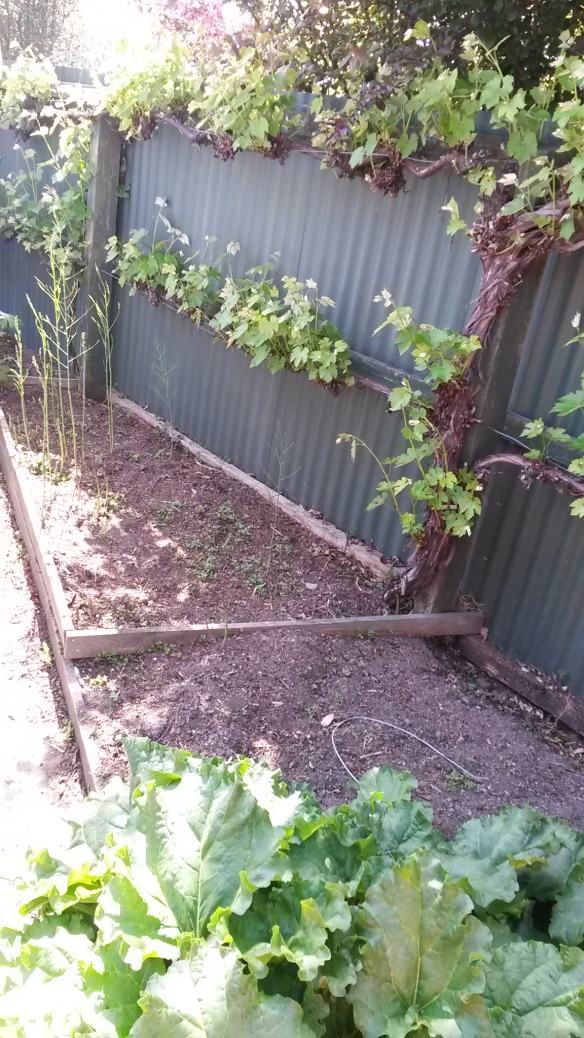 There’s a generous (for Christchurch standards) raised garden for vegetables, and I’m impressed with the quality of the soil. In back there’s even a bed of asparagus and rhubarb, with grapes along the fence.

Irises of varying types have come up in random patches. My neighbor has a color I don’t have, so I plan to do a swap. When I first worked for the veggie guys one summer in the Capital district I had big dreams of being an extension agent, driving all over the state, and collecting irises while I was about. That dream never materialized, but I can start a mini collection now.

Wisteria seems like such an elegantly fancy plant. They weren’t hardy in most of NY so we never had them growing up, but I remember an English gentleman in Owego carefully cultivating one around his front porch. Now I have one of my own, and it came out in fancy purple frilly flowers. It’ll be the summer shade for the patio, dropping its leaves and letting the sun in again for winter.

Oh, I must spare a paragraph for the kitchen. One of my non-negotiable points for house hunting was that the kitchen had to have good windows, and be near the living space. The last place had good cabinets and cook top, but it was internal. It was dim even on the sunniest summer day. I wanted light and windows, a nice view from the kitchen where I spend so many hours of my life. And this new house has this! A big window over a counter looks out to the veggie garden, and the rest of the counters look out over the dining area to the beautiful green of the rest of the garden. The cabinet fit-out isn’t fancy, but I still feel I’ve moved from the galley to the captains quarters.

The big windows in the house face northwest, which means in the winter, when the sun is low, it comes in and makes warm patches where we sit and play games (when there’s any time to sit).  As the season has turned, the sun is higher and it doesn’t shine into the windows as much, instead traveling up and over the roof.  I’m impressed with whoever designed that beautiful feature.

The garden was originally laid out with lots of love and care, but over the years there are plants that have been swallowed up in the shade, and others that have spread in haphazard profusion among the weeds.  That’s ok.  That means there’s scope to move stuff around.  I’m reminded of my Aunt Cheryl who moves plants every year like they’re furniture.

Because we live in summer-dry Christchurch, the first step has been to get the irrigation back up and running.  Over the years it’s been cut in dozens of places, or squeezed closed by plant roots, but that’s all redeemable.  Maybe I feel a bit like my father, who doesn’t love a house until he’s worked on it.  The garden work this summer will be my way to love this home.