“We are now on Christmas Vacation!  That means fun times, laughs, and treats,” Jeremiah declared.  He believes in optimism.  The car clock read 9:52 a.m.

The morning had been hectic with last minute packing and cleaning.  The kids had been “helpful” in the typical way 5 and 7 year old siblings can be: Harass–Squawk–Sent away to room–Emerge to tease again.  I emptied the trash, wiped counters, sent Milo over to the neighbor’s with surplus plums, and squeezed Naomi’s hair into a pony tail.  Jeremiah packed the roof rack, strapped on the bikes, and ate the last waffle before starting the dish washer.  Doors locked.  Garage closed.  “Hold tight, garden,” I said to the unmown lawn ringed with cheerfully untidy flowers.

30 minutes later we were zooming down Route 1 when Naomi quavered “Maaahm, I’m going to throw up!”  I scrabbled frantically for the barf bucket, shoving it under her chin half a second too late, and felt the pink liquid cascade down my wrist and shower the car seat.  She must have had berries on her waffle.

We stopped at Rakaia and stripped down Naomi and the car seat, using the RV wash station to hose out the car seat.  The kids played on the playground.  Soggy car seat lined with plastic bags, we buckled up again.  “I’m hungry!” Naomi declared.

The kids slept through Geraldine so we set our sites for lunch at Tekapo, where a new playground was recently installed at the lakefront.

Milo rejected the pb+j that we’d packed, and opted to spend his own money on bacon and egg pie at the cafe.  “This is The BEST bacon egg pie I’ve ever had!” he declared.  Autonomy from parental food choices tastes fantastic.

We drove through Twizel through heavy thundershowers.  I checked the forecast nervously; just scattered showers clearing predicted for tomorrow, our first biking day.  We could handle that. 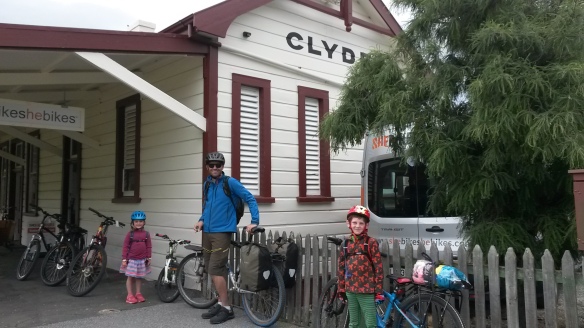 The track started at Clyde Railway Station, appropriately enough for a Rail Trail, and it was dead flat.

The Rail Trail has boxes at all the former stations where you can stamp your Otago Railtrail Passport. Most of the time there wasn’t much left to see at the site of the former rail stations, but there are little red shelters with historical info inside. We stopped at all of them.

Naomi petered along for a kilometer or two, stopping to adjust her backpack, take off her jersey, take off her gloves, look at the flowers, adjust her helmet…  I acquiesced, a model of maternal patience.  Glancing at my watch, then at the ominous white haze I could see on the distant hills, I decided it was time for rapid movement.  “Come on Naomi!”  Not a budge.  I couldn’t see Jeremiah and Milo ahead anymore.  “Do you want a tow?” I offered.  Nod.  The pattern was set for the trip; towing over tantrumming.  Pretty good deal, we decided.

Here’s one of the former train stations. We have our coats on, which means we just made it through a shower.

Our first day was the only one where we saw rain, thankfully. Clear spells and rain showers, which became increasingly rainy toward evening. The last leg towards Omakau was the only time we towed Milo on the whole trip. The kids were troopers, keeping up a brave face despite cold hands. Maybe the fists full of gummy bears helped.

Next morning dawned bright and crisp, and we cracked on.  Here was voiced the most memorable complaint of the whole journey, when I asked Milo to brush his hair:  “Ug! When am I going to lose my hair?!”  Now, that’s a pessimistic way of expressing the optimistic side of an aging process about which most men feel negatively!

It was a quick downhill ride to the first treat stop, a nice little cafe at the Lauder cross roads.  I don’t think we’ve ever patronized cafes quite as frequently as we did on this trip. 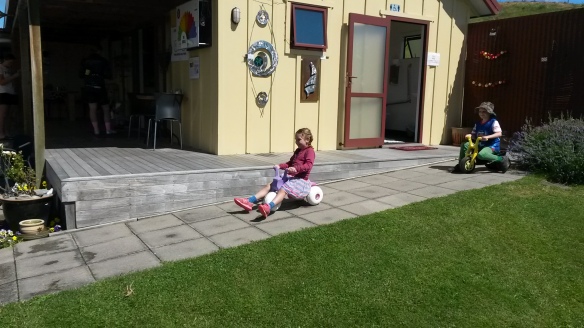 With hand rails added and some extra boards chucked into the deck between the train sleepers, the old bridges are still being used for the cycleway.

There are two long (~200 meter) tunnels on the second day of riding. It took a crew of something like 40 men two years with wheel barrows and picks to carve out this tunnel. Old photographs from the later 1800s showed a crew of bearded men staring morosely into the camera, leaning on their shovels.  Just imagine the drudgery of their lives.

Here are the remnants of one of the tunneler’s huts.  The huts were roofed in canvas. Otago is the coldest part of NZ in the winter, with regular frosty nights.  While cheerful on a summer sunny afternoon, in winter it would be abysmal.  We read a newspaper clipping from the times with two politicians complaining against each other’s management of the rail project.  “The work is proceeding heroically with men working tirelessly to open the pass, the government should support it with more money” versus “The work is proceeding over-budget and over-schedule; they should use horses and drays instead of hand labor to rectify this wasteful situation.”  Half truths and one-sided stories aimed at damaging the other’s reputation.  Nothing has changed in 125 years.

Oturehau is the hamlet where we stayed that second night, and it boasts the oldest general store still operational in NZ. The friendly proprietress/historian served us ice creams, despite being technically closed for the day.

We had been encouraged to book accommodation well ahead because the Christmas season is busy, but the days preceding the holiday were actually very quiet. We were the sole occupants of this humble hostel.

On the road again…..to the tune of Dr. Seuss’s ABC’s and what felt like dozens of renditions of The Three Billy Goats Gruff. A mild hill, then it was mostly down or flat for the next couple days.

The rail trail doubles as a scale model of the solar system. One step equals 75,000 km. As we got closer to Ranfurly (where the sun was housed) we passed planets with more frequency. 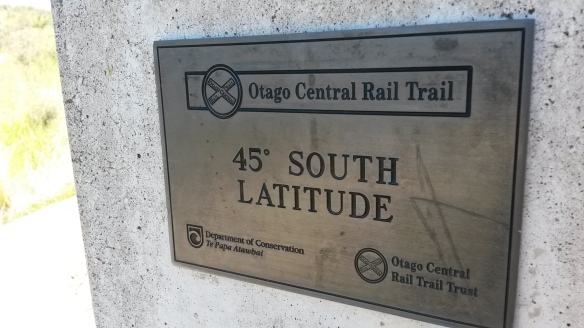 Somewhere near the trail high point was a sign for 45 degrees South latitude. It was light until after 10:00 p.m.

We got ice creams and stocked up on groceries at Ranfurly, for the next couple days food was self-catered. Just outside Ranfurly was this hillbilly’s idea of comical fence decor–dozens of pig skins (and heads) left to dry over barbed wire in the sun.

We stayed Christmas Eve and Christmas Day at Peter’s Farm in Waipiata.  One brother runs the sheep and cattle farm, while the other runs the guest lodgings in the historic mud brick farm house. The sister returned with her family for Christmas, and the grandparents, retired and in their 90s, came up for the day. It could have been quite awkward, as we were the only non-family staying there, but it was actually lovely. It was like borrowing an extended family for the holiday, and we enjoyed laughs over their white elephant gift exchange as if it was our own. 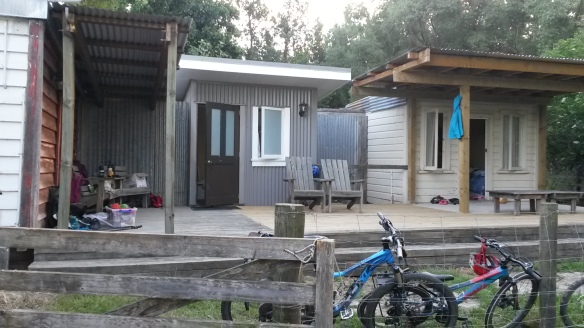 We stayed at the sleep out next to the old farm house, kids and parents in separate huts. Luxury. 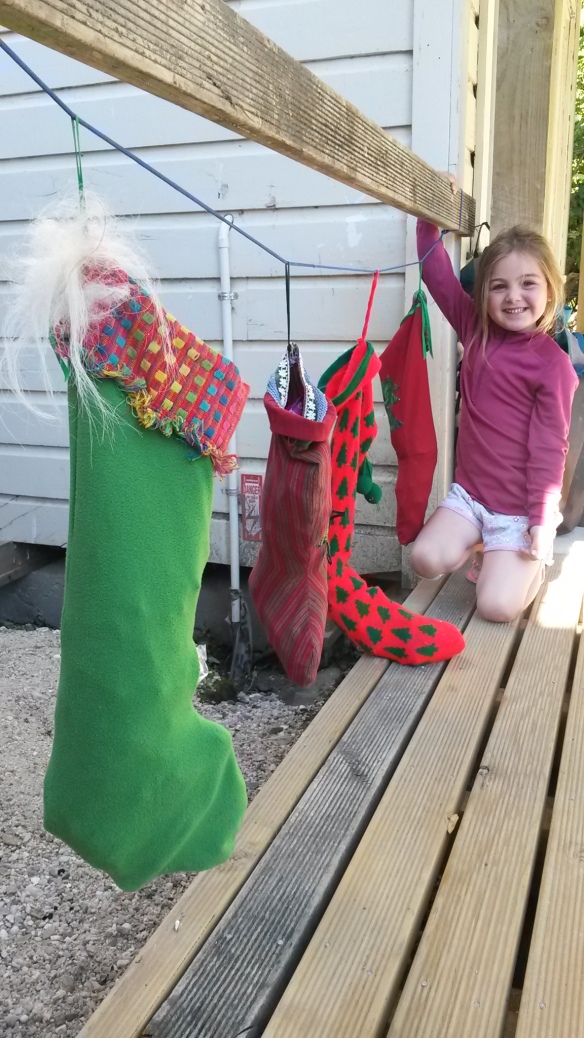 Merry Christmas! We haven’t preserved many Christmas traditions, but stockings is one of them. We had a box with a few treats sent to the farm.

Sand banks are hours of fun.

Boxing Day we resumed our ride.

Leaving the farm, Milo got to “heard” sheep along the driveway. I thought this might be the most memorable part of the trip to him–the power of one small human to move hundreds of sheep is amazing–but the next day the rabbit chase was even better. You’d think a rabbit being approached by a bike would duck into the nearby grasses, right? This silly individual scampered straight ahead on the road for well over a kilometer, until Milo, on his bike actually gave up chasing it.

Yum, cool-aid tongue in the shade for lunch. 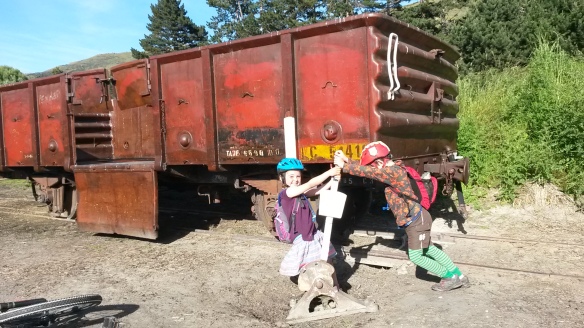 Train cars….an excuse to stop for a diversion.

Milo had a little bike computer that told him the distance we’d traveled and the time it took. “22 kilometers and 1 hour 52 minutes biking,” he’d announce, impressively. I’d glance at my watch; 2:00 p.m. We’d departed at 9:30. Ah, MOVING time. We made a lot of stops. And the kids did great, really they did. It was just the last day or so when patience was wearing thin, on all sides.

Oddly, if one kid was throwing a wobbly, the other seemed to behave like a saint. Naomi had increasingly frequent stuck spells where she didn’t want to get on the bike or get towed, and Milo was usually the one to coax her forward again. Here she is, in full pout, hackles up, with Milo ready to go in for the rescue. 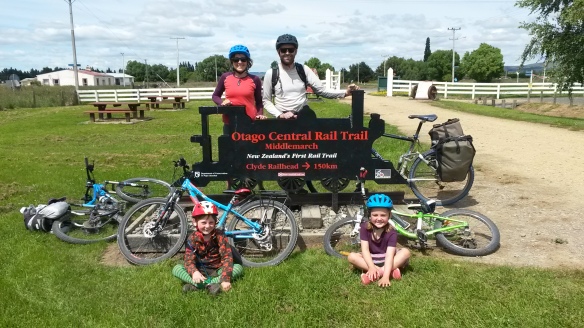 We spent five days biking, in total, and one rest day at Christmas, and covered about 150 kilometers. 158 if you count the jaunt up to Peter’s Farm, Milo reminds me. Mission accomplished.

2 thoughts on “Christmas on the Otago Rail Trail”