It’s easy to focus on the things in life that aren’t good.  It’s the definition of a pessimist, I suppose, and in defense of pessimists I think focusing on potential problems is the first step towards fixing them….  But I admit that the habit can encourage a grey outlook on life.

This week’s work has seemed full of uncertainties and unsolved problems, with a few personal dimwit moments thrown in (such as spending half an hour enlisting the IT guy’s help to fix a power supply to the microscope light, only to find I had the dimmer nob turned down).  So maybe a “simple win” story is in order, just to lighten the mood. 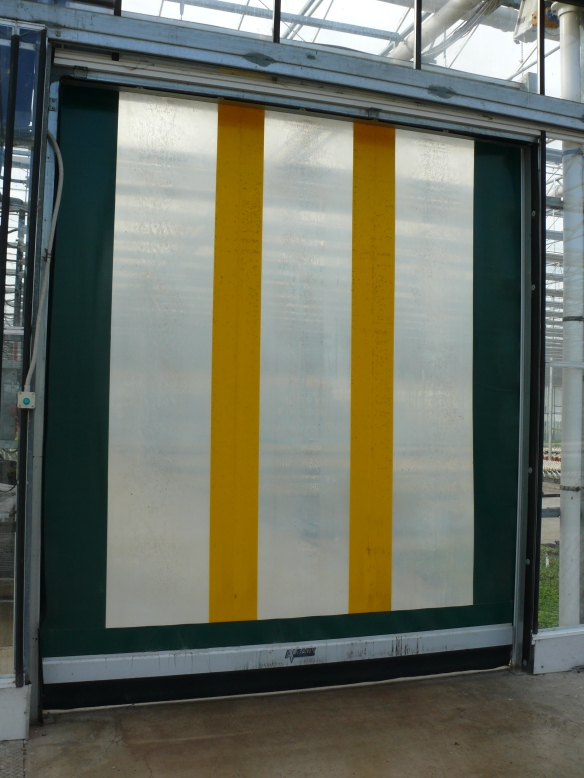 I had headed into S house at work, where the rockwool crops were growing.  The roll up door zinged open on command.  But instead of dropping shut behind me, it stayed open, allowing the cold breeze to ruffle the plant leaves inside. Not ideal….

I called Jackie, the grower in charge of the area.  He pressed some buttons to manually close the door, but when opened it stayed up again.  The error message read “object in sensor.”  “What does that mean?” Jackie wondered aloud.  English is his second or third language.

“Hum, maybe something is blocking the laser beam here at the bottom of the door, so the door thinks something’s in the way and it won’t close,” I reasoned, poking at first one and then the second sensor.  At the second a moth caught in a spider web had fallen over the little black nob.  A flick, and it was gone.  The door closed. Triumph!

That’s when Jackie came out with his pleased announcement.  As simple a fix as it was, I glowed.