“I can’t find a plastic fork….maybe I could use a knife to cut up the noodles and eat them with a spoon?”

If I was a more keyed-in person, I would have realized that my friend Teena was a bit worried about our planned tramp, if she was fretting over the cutlery.  But I was blithely unaware, and simply told her I’d throw in an extra fork.

We had had this tramp on the calendar for months, a daintily coordinated weekend date between various other weekend commitments and travels for the three of us, one of whom still couldn’t make it at the last minute.

We met at my house at 7:00, as I was keen to get up to Lewis Pass early.  Teena, good communicator as she is, had been clear that tenting wasn’t a preferred option, so I was anxious to stake a place in the popular hut in case it filled up.

“Should I bring one pair of spare socks, or more than one?” “How many pairs of leggings do you wear?” “I’ve got my eye shades, ear plugs, pillow, three jumpers, puffy jacket…..” the gear list sounded extensive, but when I lifted Teena’s pack, I was reassured. It was very practical, probably lighter than mine.

Lewis Pass is just east of the divide, and the forests get a lot of rain. As we moved into the woods, the green enveloped us from above and below. The noise of the road faded behind us.

We moved at a leisurely pace, stopping for photos and to fondle the moss and lichen coating every surface.

The diversity of non-flowering plant life is staggering. I’m reminded of a package my college roommate once sent me, a parcel of tree top greenery fallen from the western Oregon forest, soft textured greens palpating with the will to grow.

We crossed various side streams on their tumble down to join the Nina River, gentle little babbling affairs. You can drink directly from these streams.  Teena later told me that balancing on the rocks and picking her way across was a good challenge, and I must say she rose to it well; clueless me didn’t realize that she was concerned.

The weather for Lewis Pass was cooperative and Nina hut is a straight-forward three hour walk into a nicely situated 12 bunk hut, with a potential climb to a saddle another couple hours beyond the hut giving options for the afternoon. The two river crossings have swing bridges, another important consideration. Here Teena is, enjoying the luxury of teetering ABOVE the water rather than splashing through it.

This one was more of a seep than a stream, the moss obscuring much of the water flow. 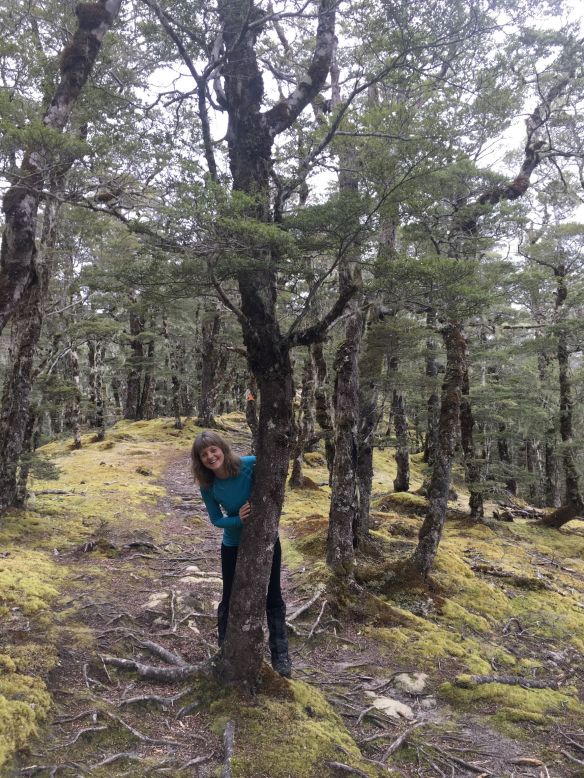 We at lunch at the hut. It is situated on a clearing in a knoll some way above the river, a cozy hut with double glazed windows and a good wood stove.

We took a short walk in the afternoon up the valley. The trail eventually comes out at a saddle with a gorgeous little two bunk hut, though we didn’t go up that far this weekend. I wanted to stay there a couple years ago after a walk along the Sylvia tops, but it was inhabited already, so I had taken the track on down to Nina hut for the night. I hadn’t remembered the trail being difficult to follow at the time, but this time we had to keep a keen eye out for the orange markers to avoid going astray.

We passed a few more picturesque streams.  They always remind me of my Dad, who loves woodland streams.

Back at the hut we spent a little time collecting fallen beech branches for the fire. New Zealand beech is a different family than north american beech. It might technically be a hard wood, but my experience collecting it to burn is that it’s nearly always squishily saturated with water. The dead branches must do a fair bit of rotting on the tree itself, and when they fall they encounter deep moss on the forest floor where they somehow absorb even more water, to the point of literal sponginess. It doesn’t bode well for a hot fire.

Luckily, on our afternoon walk we passed a tree that had been blown down a few years ago, its branches held safely above the forest floor.  We eyed it up as good fire wood, and returned to it later. The hut woodshed had an excellent saw, which is unusual for a hut, so we soon had an impressive stock of firewood ready.

I had forgotten how satisfying it is to make a nice fire! It’s a skill I want to teach my kids, I reflected. Maybe this year would be a good one to get them tramping again. Jeremiah had suggested it only the week before and I had recoiled in haste, remembering the coaxing and energy-sapping cajoling it took to keep them moving on past trips. But maybe….maybe I can muster the umph again. And maybe they’ll be better now that they’re a bit older. 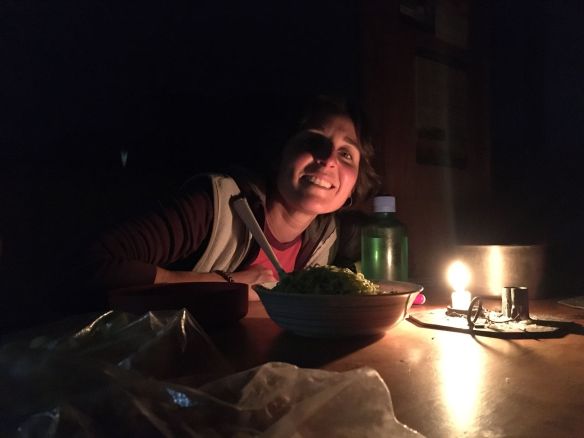 After dinner Teena taught me a new game, after which we basked in the wood stove warmth on top of our sleeping bags on the bunks. So much for being worried that we’d have to compete with hordes of trampers for bunk space! We had the hut to ourselves, so we yip yapped like school girls for a couple hours before we called it a night.

Teena’s enthusiasm for the experience was gratifying. She enjoyed the peacefulness of the forest, ate well, slept well, was not eaten alive by sandflies, remained bouyant after tripping and sliding on a section of trail, and coped well with a stomach ache (not related to my cooking!). I enjoyed seeing the tramp through a new tramper’s eyes, and I felt a renewed energy to bring my kids out into the woods.

Thank you, Teena, for reimagining the tramping experience with me. I’ve gained renewed sense of wonder at the lush forests and streams we’re so privileged to have in our NZ back yards.