We had originally planned to go to Arthur’s pass this weekend, but the forecast was horribly rainy so we looked at the south island map and picked the only semi-dry forecast, the Kaikoura Range. The track is in the riverbed for the first 4.5 kilometers, then climbs uphill to Hapuku Hut where we planned to stay for two nights, just day-hiking on the second day, hiking back out on the third. Here we are in the gravelly river bed on our way in. What you can’t see is our feet, they’re in sandals. We crossed the river 12 times on the way to the hut and Kiwis just walk on through the knee-high water with their boots and all. It’s called “wet foot tramping,” not surprisingly. But we’re Americans, and keeping one’s boots dry while hiking is ingrained in our psyche. We couldn’t stomach the idea of our boots filled with water, squelchy and cold for the next three days, so we wore our sandals and abraded our feet with river grit. Putting on our warm dry socks and boots when we reached the hut was like slipping on sheep-skin slippers—ahhh!

Jeremiah brought his rifle along to go hunting in the evenings, but somehow grabbed the wrong key for his gun lock. Bummer! We were a good 2.5 hours from our house. But this is JEREMIAH, remember, with the legendary determination. He’s not going to be hornswaggled out of a hunting trip by a little thing like a lock. He took about half an hour to bash it with a rock, broke it open, and off we went.

It feels wild and exotic walking up a trackless river bed, turning a corner and seeing a waterfall cascading down into the gorge.

We shared the hut with three other folks who had come out to go hunting as well. First night I thought I’d be able to get Milo to go to sleep while they were all out stalking deer and the hut was quiet, but after two fruitless hours I gave up in frustration, having reached the limit of my patience. He finally fell asleep on his own terms, leaning up against Daddy, who, just freshly back from hunting, had a cushiony reserve of patience to dole out. The next night I just let him stay up until he was practically begging to go to sleep, then let him lay next to me and listen to a podcast with me. We were both much happier.

Here’s my little Milo Hobbit! He was pleased as punch to find himself a walking stick from the firewood pile and go striding off down the path to the stream. Until the big step down, of course, where he was still happy to reach for Mama’s hand. Not for much longer, I’m afraid.

“Look at ME, Mama! I’m a big boy and I’m going down to the stream to throw some rocks!” I remember the pleasure of playing in creeks as a kid, watching the water hump up around stones, the eddies moving my floating leaves back upstream. Milo loves it all. 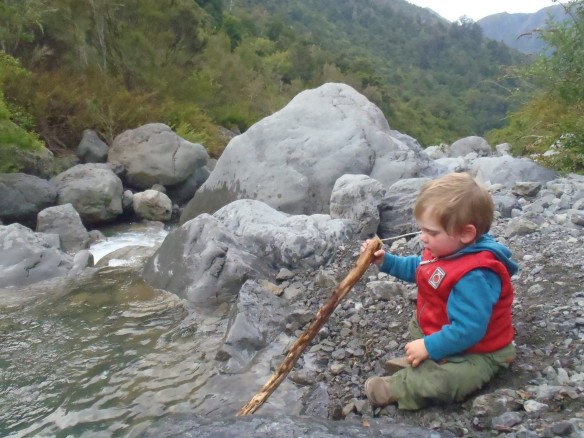 The view? Who cares, when we have WATER to play in! Milo’s actually very good about sitting on the bank and throwing rocks, rather than wading into the fast-moving current.

The second day we hiked up to the saddle between two mountain peaks. The route followed a stream up into the arm of the mountain where the trail disappeared and you just make your way up the loose scree. Jeremiah, ever optimistic, carried his gun and binoculars to look for goats. We didn’t see any, but he did see deer down a little further on the shrubby slopes of the mountains.

Phew, you can tell how steep it is by how much Milo is huffing and puffing!

MMMM, COOKIE! Mama eats carrots but Milo sticks to cookies and cheese. There was still a little snow up here, but it wasn’t that cold. We ate our lunch perched on the saddle looking down one valley to Kaikoura and down the other to the Hapuku River. We met another American couple up there, the man was wearing a Cornell hat same as Jeremiah. It’s funny where you meet these Cornell people–and I’m starting to understand why Jeremiah treasures that red hat so. It’s a conversation-starter.

No deer to carry out, but that might be just as well since we’ve got the little bambino, and he’s no featherweight. It was raining and a bit chilly when we set out, so we stuffed him in his sleeping bag, this time with holes cut out for his feet. He’s got the Mama stocks over those feet, then Jeremiah’s gortex mittens. A pack cover completes the swaddling, and he stays mostly dry. He’d stay completely dry if only he’d keep his arms in, but he insists on dangling them out in the drizzle.

On the way out we resolved to try the “wet boot” method, because we had dry shoes waiting for us in the car. Kiwi’s insist that it’s “not that bad” and one even said the wet boots mold to one’s feet better, improving the fit of the boots. Taking that first step intentionally into cold water felt utterly wrong, but actually, the wet boot method did beat the gritty sandal method, and definitely had the upper hand over taking one’s boots on and off a dozen times. We didn’t have to put those boots on again in the morning though, we’ll have to see how we feel about that another time!