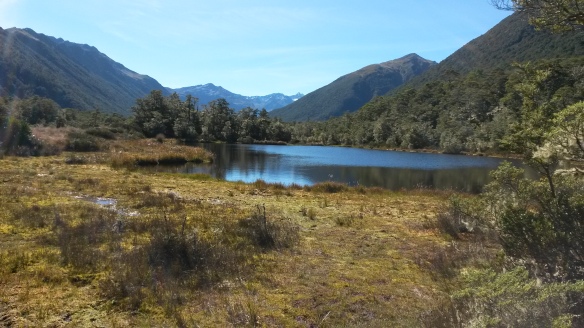 Ah, the New Zealand Alpine. I’ve missed it. It’s been nearly a year since I’ve been tramping, but my back is feeling much better and I planned a weekend hike with some girlfriends. We headed up to Lewis Pass Saturday morning and lucked out with the weather. 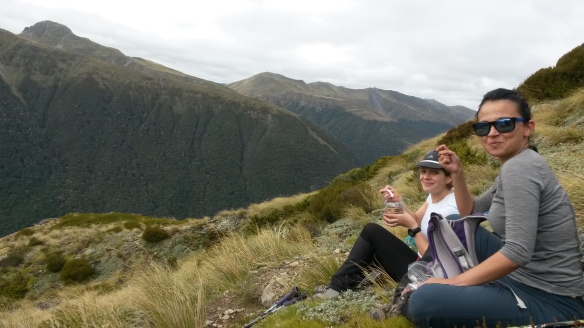 We were looking for a not-too-difficult tramp that included least a little high country, so we settled on a morning walk with just day packs up to the Lewis Tops, lunching in the alpine tussocks, then back down to the start of the St James walkway where we’d pick up our overnight packs and head to a hut for the night. My hiking companions this weekend were Steph (Australian) and Irmana (Spanish).

When you look closely at the alpine ground covers, you have to be impressed with their variety and toughness. I had on a coat and gloves, and it wasn’t even winter. These little guys get alternatively scorched by the sun, frazzled by the gales, and petrified under snow….and yet they look cheerful. Some are even making berries. 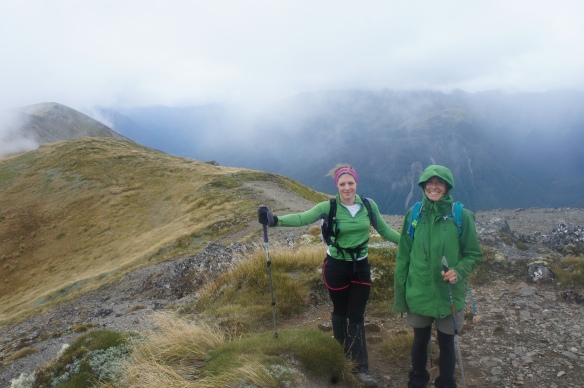 The Lewis Tops walk continues for a few miles over this ridge line. There is a hut up here somewhere, a tiny “bivouac” two-bunker.
About 12 hours after starting you eventually reach a bigger hut in a valley (so the map says). I’m going to come back some day and do it. Some gloriously still day. Maybe the wind stops up here on occasion? It was remarkably chilly up where the clouds were skimming low and we were glad we had decided NOT to tent up here. But I’ll be back.

It was hard to turn around, but turn around we did. “The path goes ever, ever on…over grass and over stone….and I must follow, if I can….” JRR Tolkien.

The good part about going down is heading back into the trees. Lots of people don’t like hiking through forest because they find it boring compared to the outlook of the tops. But I don’t get tired of the GREEN.  Especially the dappled green of a sunny day.  I just love it. 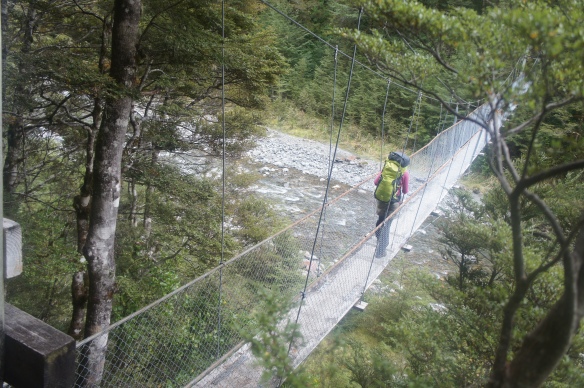 The St James walkway has very luxurious swing bridges. We crossed two of them. You don’t take bridges for granted on NZ tramps, as may of the trails involve wet-foot crossings!  I had promised the girls a flat hike in, but I obviously mis-remembered from last time.  “Undulating” would describe the route better.  I have to say it felt flatter on the way out, on rested legs. 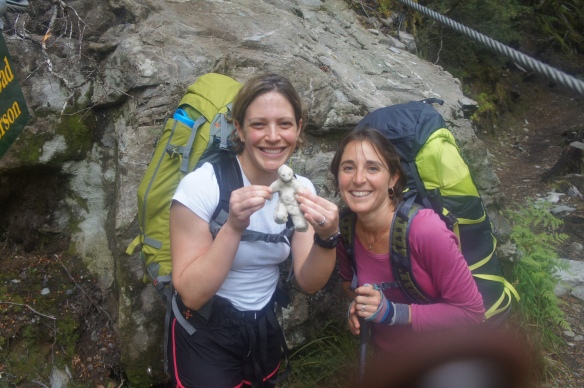 Across one bridge sits a little clay man on a stone (yes, he has man parts), laughing at you as you bounce across the bridge. Whatever he is made of weathers pretty well; I remember him there from a couple years ago!

Cannibal Gorge Hut. So named because lots of human bones have been found in this valley, a trading and raiding route for Maori tribes coveting greenstone from the west coast. There’s speculation that the people were eaten after losing a battle. I wonder what Man tastes like. Ug. This hut has never been one of my favorites, maybe because of the name, or maybe because last time we were here it was completely infested with mice.

No matter about the Ghosts of Cannibals lurking nearby. We lit a fire and passed a cheerful evening. Did you know that Old Man’s Beard lichen makes an excellent fire starter?

The frost was heavy on the grass in the morning, the first I’ve seen this year (being a city-dwelling low lander these days). 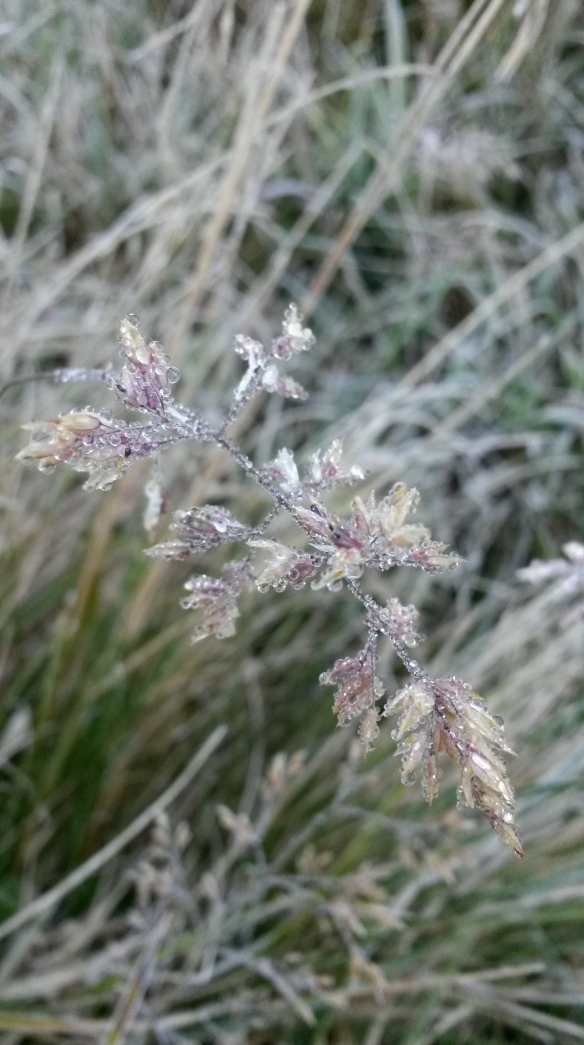 Frost is beautiful, when you’re personally warm at least.  Which I was.  Hurray for good gear (thanks to Jeremiah for that).

A three hour walk in the morning brought us back out to our car. This part of the forest has green above and green below, a mature southern hemisphere beech forest. They’re good for pondering, these forests. Is there something inherently contemplative and restful about the color green? It seems that way to me.

So, I’m back in the hiking business.  It’s great.  Really great.  I feel like I have my identity back.