“What are you guys doing at Easter?” my friend Laura asked.

“Oh, nothing big, we’re saving money for our trip to the States in July….maybe camping on the Banks Peninsula,” I responded, unenthusiastically.

“You could always come up here to Nelson,” she offered.

I looked at the forecast.  Tropical cyclones had been bringing flinging wet weather at us for the past two weeks, the forecast was dire, and Laura’s new house is ample and warm.  Camping really didn’t sound that appealing in comparison.  “Yes, please!  Let’s go for a weekend to Sunny Nelson!”

We drove up Thursday night in the rain and listened to the comforting sound of rain on the OUTSIDE of their roof all night.  The next day Jeremiah and Laura brewed a batch of home brew while Jordy and I took the kids to the Wearable Arts museum.

Here are Audrey and Naomi posing next to a dress made out of plastic buckets. The kind of bucket that can be purchased at the Warehouse for $1. Did I mention how much I LOVE the wearable arts show?

Here’s an elaborate costume (replete with pet dog who never poops on the grass) made entirely of plastic coated wire. The kind that’s inside your house walls. I LOVE it!
“Let’s start with the movie!” I suggest. It’s the compilation of last year’s show, which I got to see in person. The memories came flooding back as I watched the flamboyant costumes on parade, even the deep feeling of envy that the performers had such lithe use of their bodies (mine was quite painful last October, no weaving or turning or hip waggling due to that darn disc in my back).

This was the Baroque-themed section of the display.

Wouldn’t you want to prance around with a lit-up petal skirt? Audrey would!

Or how about a ram’s head mask made of metal filigree with matching wings? Yes please!

ANYWAY….back to the rest of the weekend. Laura has a hot tub on her deck!

In the past there has been significant friction between Milo and the others, but Milo behaved himself this weekend, making the parents’ time that much more relaxing.

Saturday dawned gloriously and we went with Ben and co. to some fishing ponds near the Waimea River. (Ben is Jeremiah’s hunting buddy who lives in Christchurch, but was up with his family the Grandparent Homestead near Nelson.) 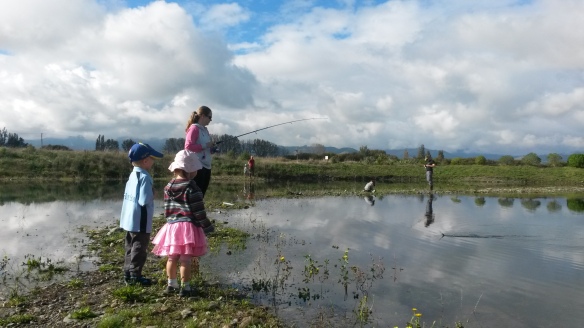 Ben’s nephews had just pulled two fish from the ponds when we arrived, and one more was dragged out a bit later. A pleasant surprise, since the word on the street was that the ponds were devoid of fish. That was, presumably, why no one else was there (we later found out that the ponds are not open for fishing except for some very few-and-far-between days in the year….ignorance is bliss). Despite our best efforts “we” caught was weeds. I say “we” because Molly doesn’t fish. I brought my knitting and sat in the warm sun on a bench overlooking the cloud reflections in the pond, occasionally helping a small child pee in the grass.

SOMEONE had pulled fish from those ponds, so on after a rainy day on Sunday, Monday morning we had another go. The rest of us were still messing with tackle when Milo cast his lure. “I have a bite!” he shouted. We glanced up. Sure enough, it looked genuine–the pole was bent.

“Get a look at THAT!” The fish flopped energetically.  I plied the camera.  The fish managed to extract itself from the hook, wiggling perilously close to the water’s edge. 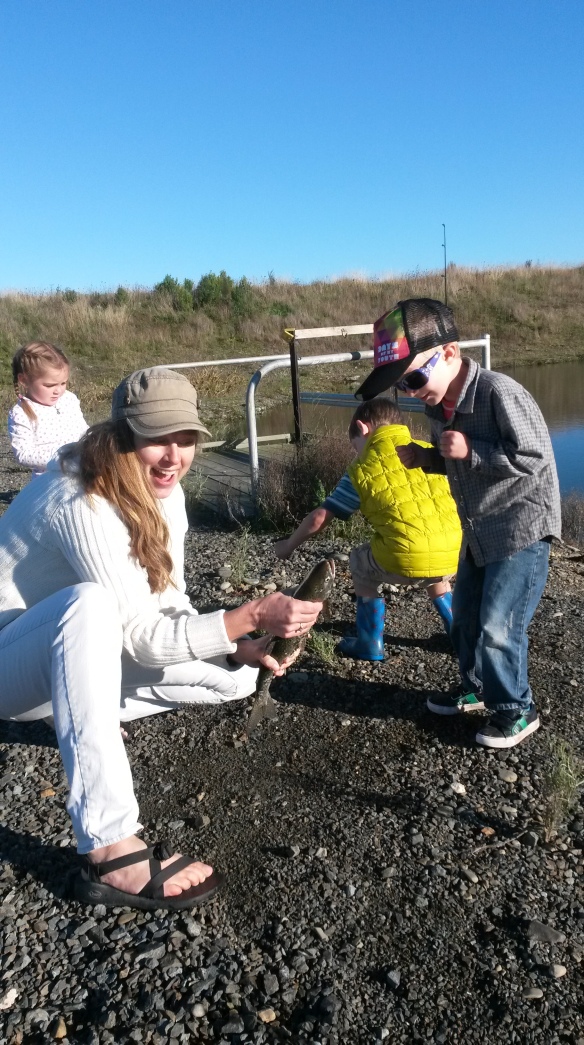 Good thing Laura is a veteran fisherwoman. She grabbed that slimey fish and wacked it over the head just the way she has wacked Alaskan salmon since she rolled out of the cradle. Thanks, Laura! That’s a bit of motherhood that I have failed at.  Definitively. 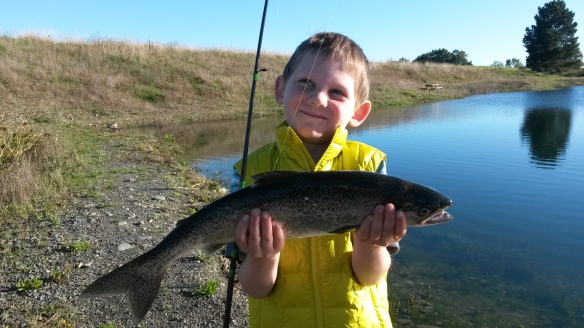 “He got his first fish,” I told my colleagues at work the next week. “He’s an addict,” I proclaimed, rolling my eyes. “Kids who fish aren’t on the police’s Wanted List,” my boss put in. Ok, point taken. I may not share a love of fishing, but I appreciate that the hunter-fishermen get outdoors with a goal to catch some food.  The salmon was tasty. 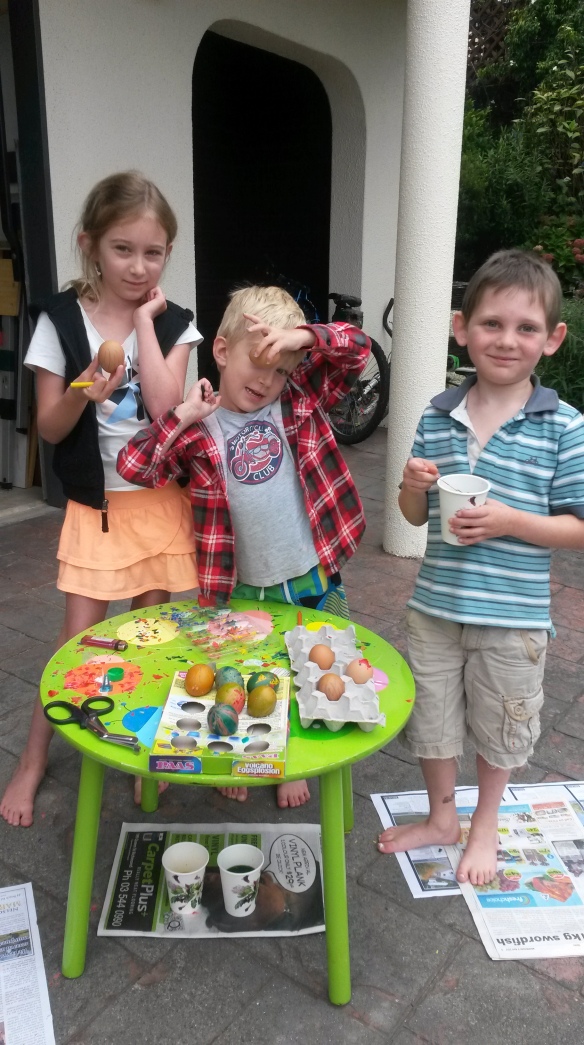 Thank you, Laura and Jordy, for hosting us over the holiday weekend!

1 thought on “The First Fish”