I’m not an optimist.

Like when I balance the hummus on top of three leftover containers as I’m fridge foraging and expect to catch it in mid air if it falls….  I end up spooning hummus off the floor.

Or like when I decide at 8:24 that I can fit a week’s grocery shop in before the store closes, only to realize upon arrival that 9:30 is 30 minutes AFTER closing.  I sprint through the aisles, making it to the register in time, but have to return the next day for the forgotten parmesan.

Or when I thought my parents might move to NZ.

Optimistically, it IS possible.  I currently have the only grandkids on offer (the lure).  There is one work visa that isn’t age capped at 55 (the legal option).  My parents have been known to make big moves to be close to family before (the motivation).  And them coming here would solve so many problems, not leastwise my guilty conscience ones.  Then the kids wouldn’t be lacking grandparents because of my decision to leave America.  I wouldn’t have to re-invent the wheel when it comes to parenting strong-willed children.  And when my parents get old I can mow their lawn for them.

Their most recent visit was in July, the dead of NZ winter, to investigate the worse part of the year in anticipation of relocating here for a stint.  We used their visit as a deadline to buy a house, knowing that winter in the old place would not be a good marketing strategy, and we bought a lovely little place within walking distance of the school, with big windows facing the sun; insulated, with double glazed windows and two heat pumps.  June weather was rainy and uninspiring, but July really played ball, with quite civilized sun and glorious winter days.  But for various reasons, some Visa related and some not, it was not to be.  Omi and Abi aren’t shopping for a place to live around the corner from us.

Considering that I’m a pessimist primarily to avoid disappointment in life, I was surprised at the depth of the let-down.  It was a long shot to begin with; rationally, I KNEW that.

Inigo, Get Used to Disappointment.

So I finally need to post some pictures from their visit, to celebrate the time that they DID have here. 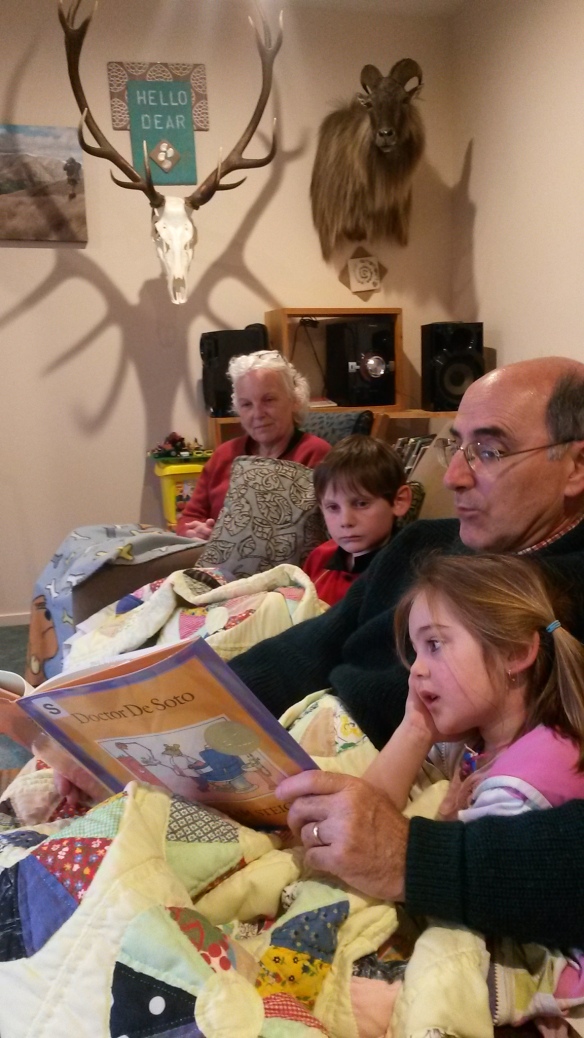 My most enduring memory of their three weeks here was how much time they spent playing with and reading to the kids. “Want to play Uno?” Yes! “Let’s read a book.” Ok! Grandparents have lot of love to go around. That, and they’re fantastic at helping with the dishes. 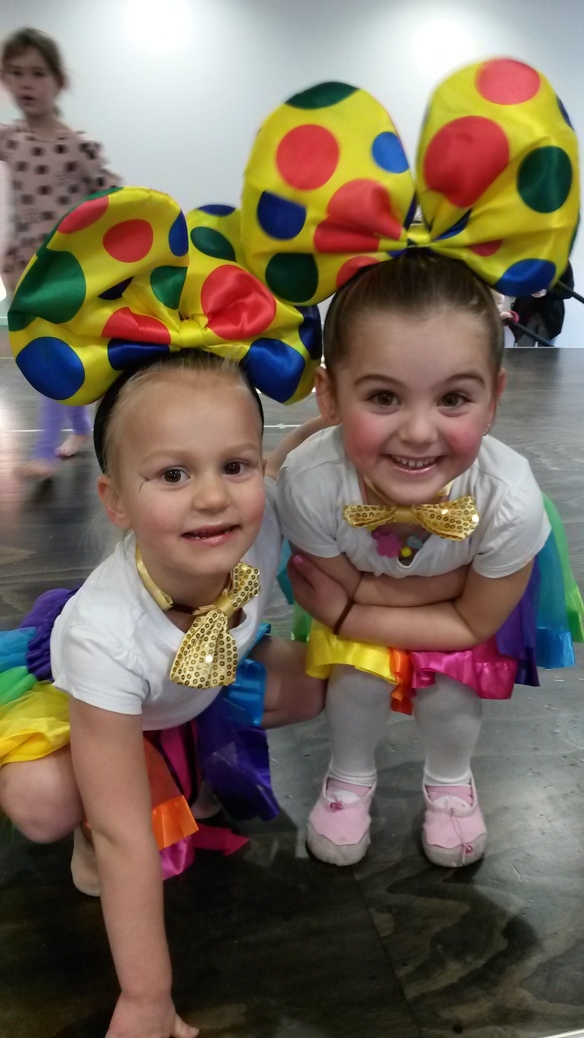 It was end of school term while they were here. They went to a show-off-to-parents day at Milo’s school and attended Naomi’s first ballet recital. 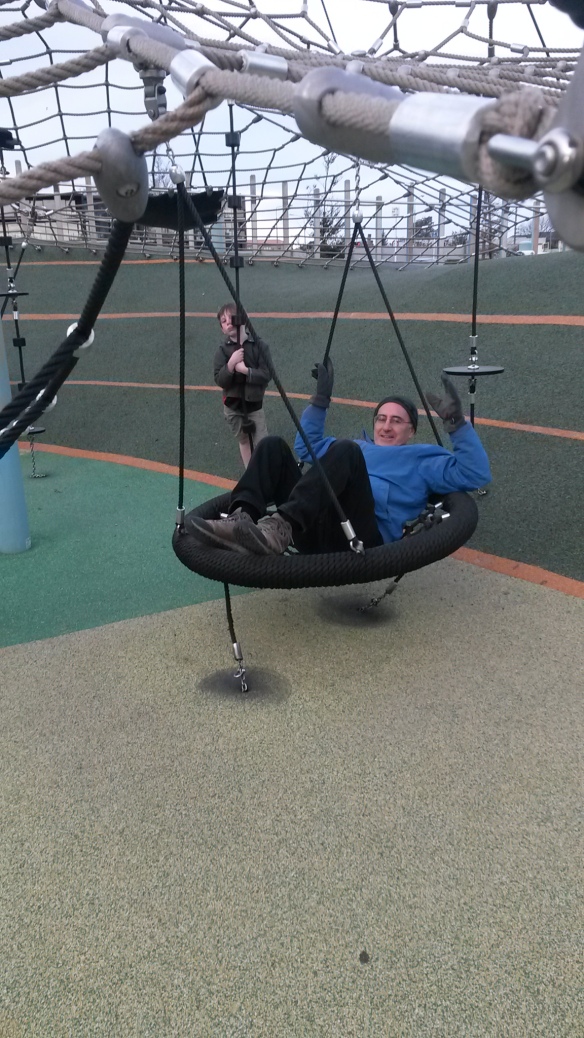 They went to playgrounds…. 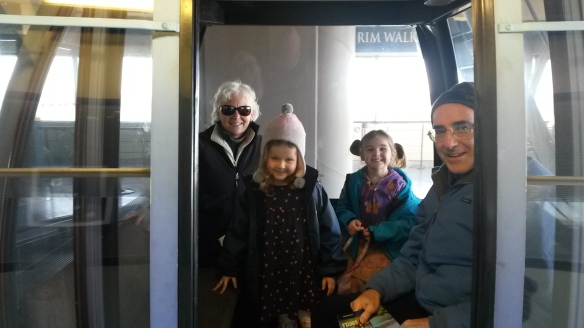 And to the Gondola, (with our friend Summer) 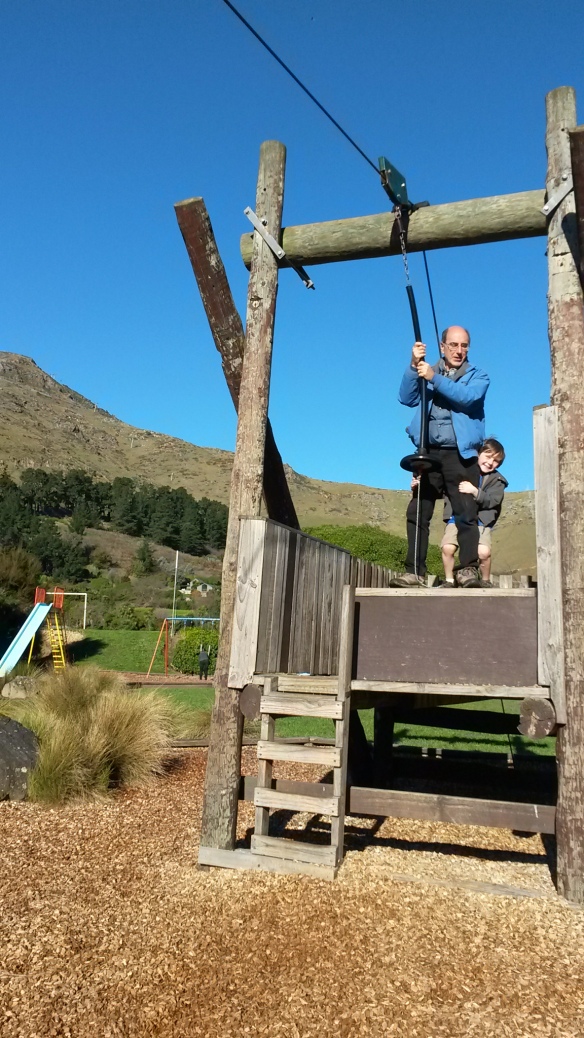 And to more playgrounds! 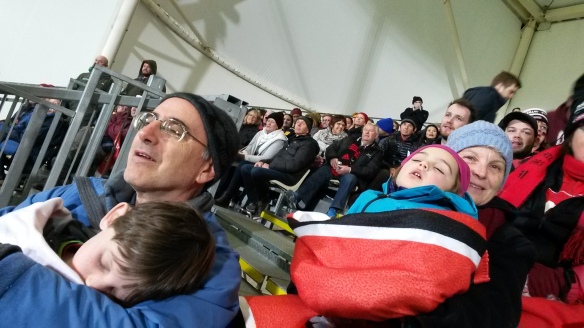 We took them to a Crusaders rugby game, only to have their hosts fall fast asleep on their laps! We had parked blocks and blocks away, and as the crowd tromped down the bleachers and my too-big-to-carry children snored away on their grand’s laps, my Dad looked up at me. “I don’t know what we’re going to do,” he stated, in some consternation, as I wondered if Uber drivers would pick up cargo from the stands. In the end Milo woke up enough to walk, and by the time we reached the car even Naomi was chirping away on my back completely capable of moving her own legs ( though opting not to do so). 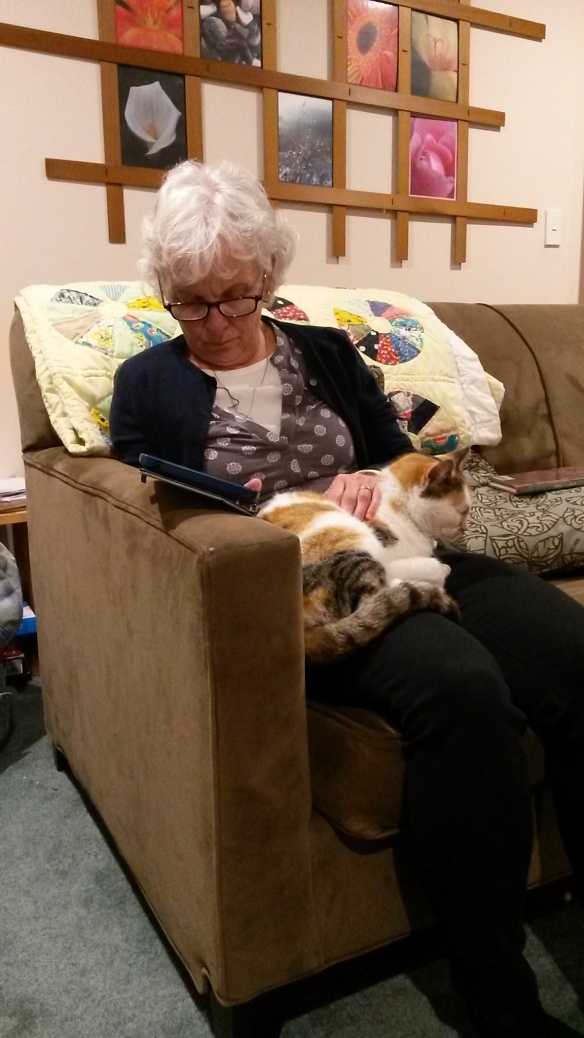 Even Jenny cat basked in the unusually high level of affection. 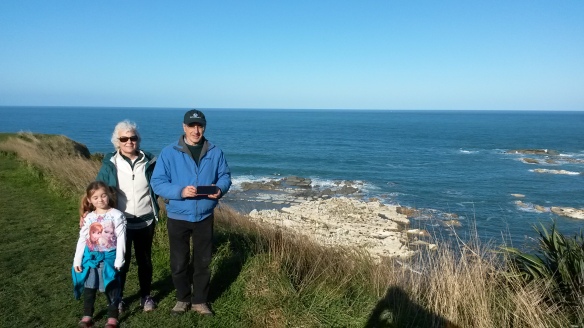 During the second week of school holiday we drove up to the Marlborough Sounds via Kaikoura. 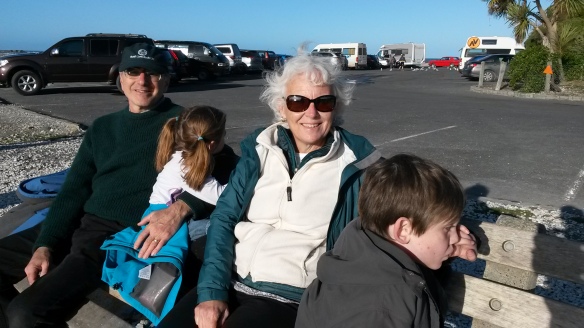 Milo was miserable during this Kaikoura walk–you can see it in his “I won’t cooperate with you even for a photo” expression. Not that there was anything physically wrong with him, but lousy attitude is enough to ruin a walk. “Milo is getting away with utter disrespect. He’s acting like he’s a little prince, and it’s working for him.” My dad, with the benefit of a fresh viewpoint, sees the situation and calls me out on it. We spent that walk strategizing how to turn a corner with Milo. I sometimes feel as if I’m parenting a uniquely difficult child, but of course there is nothing new under the sun, as those with the benefit of distance and experience can attest. 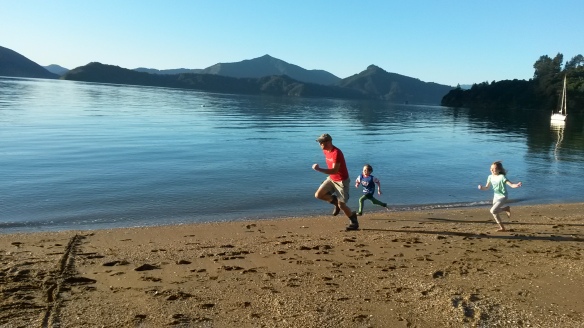 Weather was superb in the sounds; look at that glassy water! Remember, July is mid winter in NZ, and this is the ocean of the “Roaring 40s”. 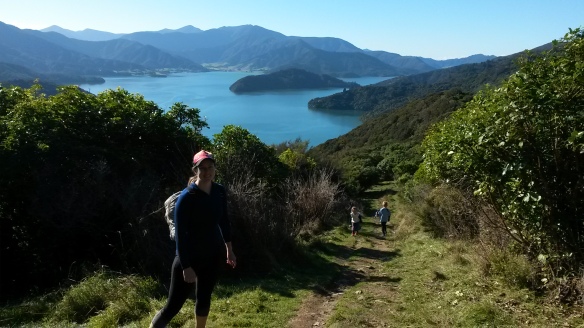 Laura and her two kids, Audrey and Noah, joined us for a few days of our Marlborough holiday. Here we are tramping a portion of the Queen Charlotte track. 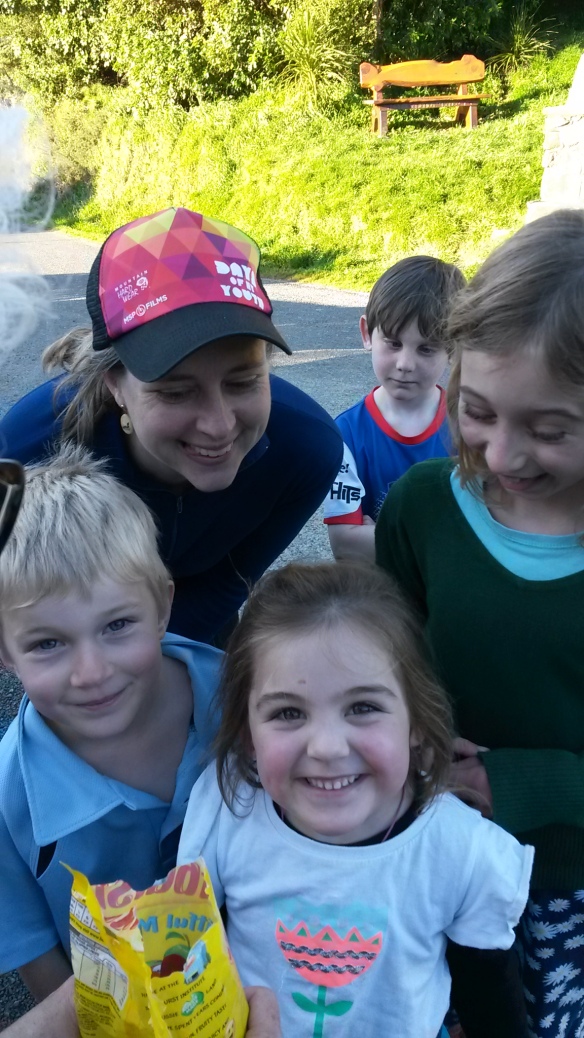 And we are particularly excited about the gummies at the end of the walk! 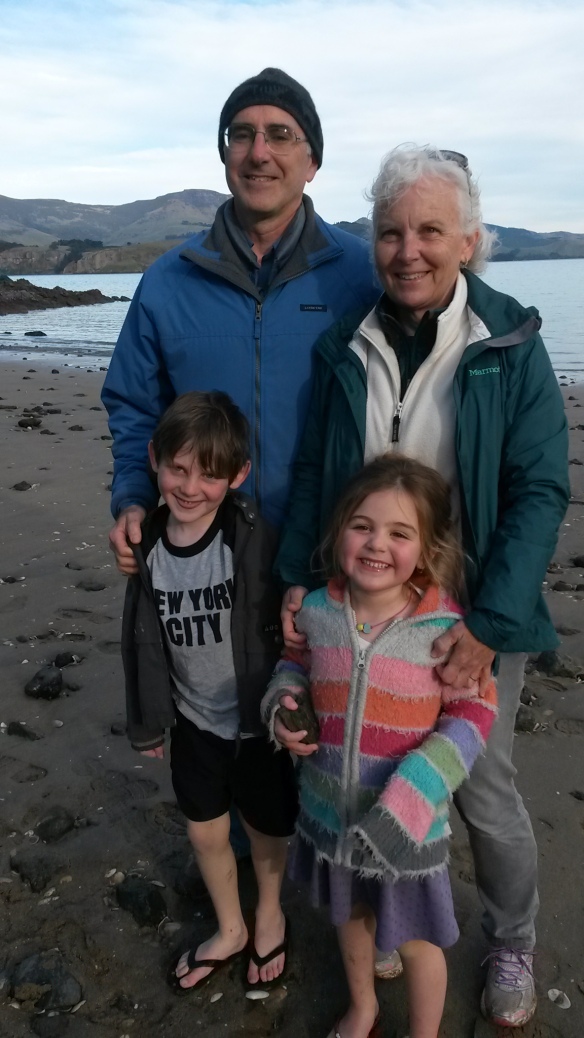 As tantalizing as the idea is, Grandparents are not going to be living around the corner. I have mourned, and now I must move on. 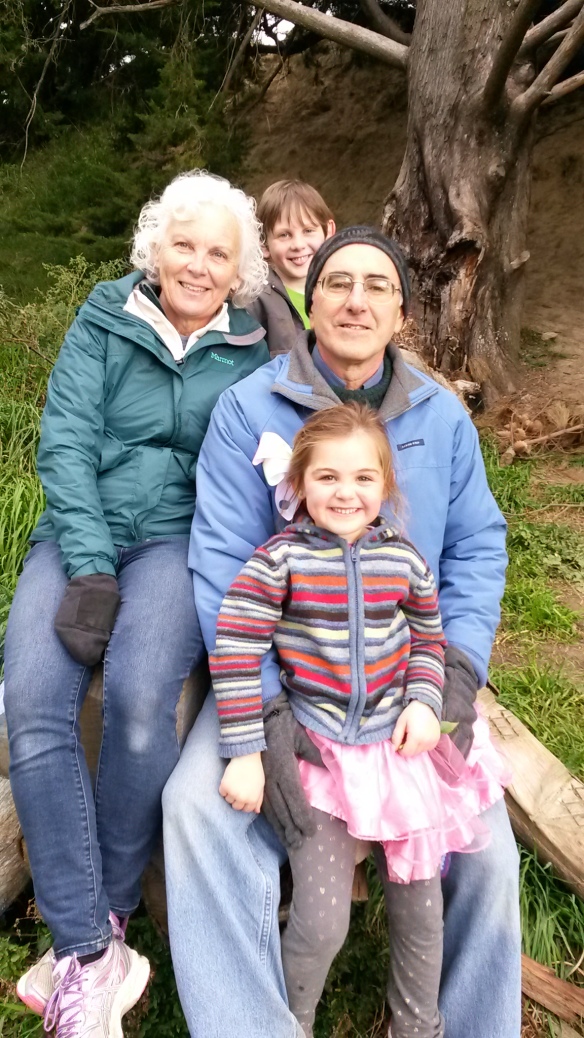 We love you, Omi and Abi!

4 thoughts on “Get Used to Disappointment”