“That’s not our track!” I protest, as Jeremiah veered off the road to the gravel parking bay.

“No it’s not; ours must be a little further ahead,” I insisted, dogmatically.  Admittedly, I find the planning and mapping stages of a hike a necessary nuisance, so I hadn’t actually looked at the map all that closely…..  But I thought we were going on a proper track.  When I had relayed our plans to Emma, her exact words were “oh, you’re not going on Rough Creek track, are you?  That’s a gnarly track.”  I wasn’t feeling gnarly.

“What do you want?” Jeremiah demanded.  “Do you want to turn back?”

It was Rough Creek that we had planned, marked right there on the map.  Darn. 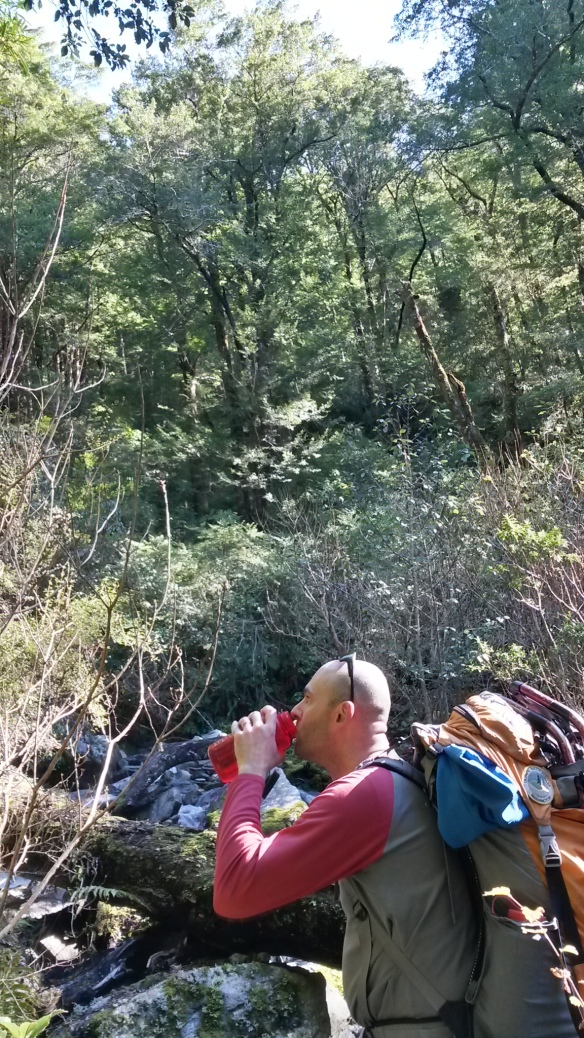 As we climbed though the green beech forest, I kept waiting for the gnarly to appear.  Track wash-outs, blow-downs, thick scrub….. but nothing.  Just a steep relentless climb up rocks and roots to the bush line.  Oh well, I suppose gnarly is a relative term, and Emma had been running the track, downwards.  It certainly would make for a hairy run down, and a breathless scramble up. 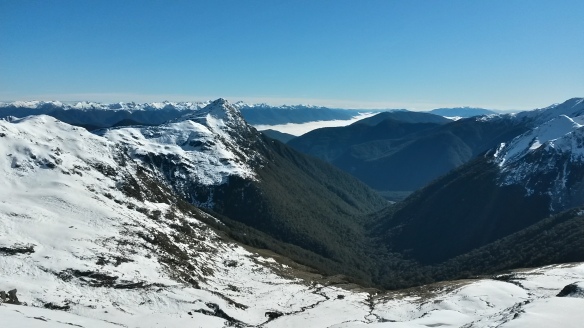 The track had started in the middle of that green valley, where Lewis Pass Rd runs through the mountains.

We had planned a different hike for this weekend, but there had been new snow fall in the Mt Potts area, and the avalanche risk was “moderate.”  “Moderate” is too much for us avalanche rookies, especially because our whole planned track was under steep slopes.  So we had switched plans to Lewis Pass late Friday night after dropping the kids off with our friends.  There was very little new snow here.  In fact, when we popped out of the trees and looked up at the open alpine, I thought we had carried the snow shoes for naught.  I could see patches of bare rock all the way up.

Turns out those snow shoes were essential.  Just the ticket in fact, and we were feeling quite smug about having the right gear for the soft snow exposed to the afternoon snow as we trudged up to the saddle.  We paused at the saddle to send Emma a message, saying that we were, in fact, at Rough Creek. 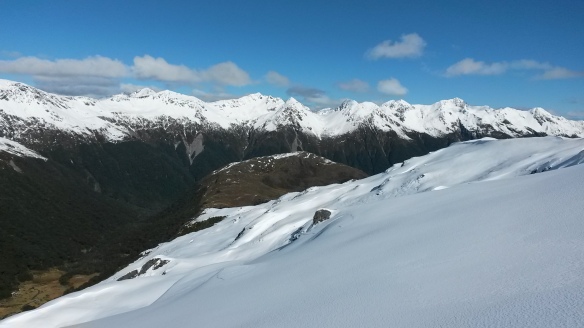 The amazing thing about winter hiking in New Zealand is that hardly anyone does it. We saw one set of old foot prints on our way up, and the decent down the other side was pristine. Pristine, crisp, and fast on the hard cold show of the south side of the mountain—it’s quite the feeling of power, zooming along on top the crust, gravity assisting on the decent, with snow capped mountains quietly standing in every direction. 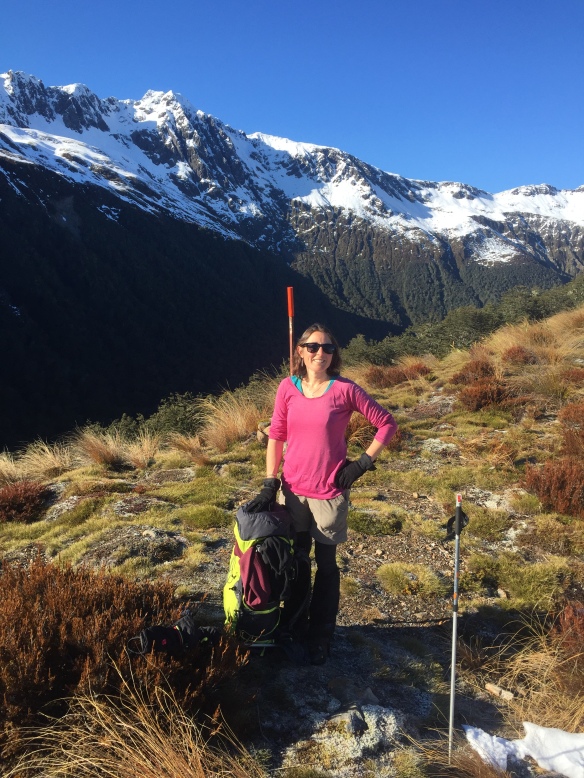 We left our snowshoes at this pole just where the snow abruptly ended; no need to carry them down to the hut and back up again the next morning.

We reached the intense green of the beech forest again, and descended just as much as we had climbed on the other side, down to Cristobel Hut.

It’s a nice little DOC hut in a clearing on the river, and no one else was there.

We lit the fire, made some coffee, spread some mattresses on the floor, and broke out the chocolate. 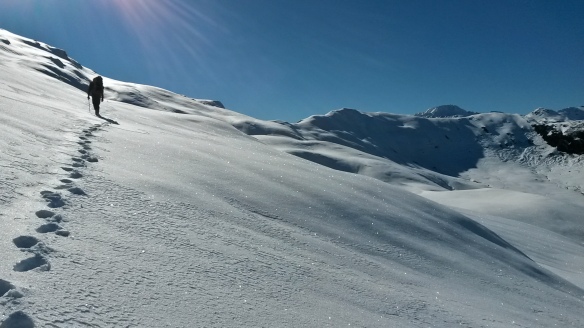 The next day we retraced our steps up through the woods, but took a different line through the snow to the saddle. The sparkles on the snow were big, maybe frost crystals that had grown over several nights, more like stars than I’ve ever seen before in the snow.

At the saddle we again marveled at the expansive view, appreciated by us alone, and crunched down the now-hardened snow to the bush line.

It probably sounds stuck up, but it’s an amazing feeling to get out into the mountains where no one else is.  It makes you feel strong, intrepid.  The open physical space somehow facilitates a better head space.  It’s a potent antidote to the ease of suburban living, to the numbing routine of vacuuming and squabbling kids and asphalt.  We’re so lucky to live in the sparsely populated country, always close to the mountains.