My sister Susanna visited us in New Zealand at the end of February.  It seems like another world now, in the age where we were working, going to school, and exploring the wilderness, but it was less than two months ago.  Life was busy then and I didn’t take the time to share any photos from her visit.  Now I have time, and it’ll do me good to remember that world.

I haven’t lived with Susanna for 20 years, if you can believe it–I’m marking time in decades now, like the old farts.  Almost 20 years ago I left home to go to college.  Susanna is 8 years younger than me, but she and I used to spend a lot of time together.  I was energetic and project-oriented; so was Susanna.  And she (unlike me) was very sociable.  My enduring memory of her childhood is her lovely saying, “I just want to be with you.”  It didn’t matter what I was doing, whether it was scrubbing and re-staining the deck or vacuuming the swimming pool or raking leaves, Susanna was happy to come along and help out.  And personality-wise, we’re very similar, except for the aforementioned sociability.  I was curious to see if that similarity had lasted over the years.

Turns out it has.  As much we’ve changed ourselves in various ways, the core preferences and personality are still the same.  It’s comforting in a funny confidence-boosting sort of way; there’s someone else in this world who operates just the same way I do.  And moreover, her way of moving through the world is working just fine for her.

The following trip was from February 20-23.

It was mid winter 2019 when Carrie suggested planning the hike into Gillespie Pass, down near Queenstown.  It would involve taking some time off work and arranging the husband calendar to take care of the kids, but the other girls are much better at trip planning than me, and all I’d have to do is jump onto their good forethought.  So we planned, and we hoped for good weather, the one thing we couldn’t schedule ahead of time.

As the time approached, the forecast did not cooperate.  It became so dismal for southland, in fact, that we had to move to Plan B.  Carrie found a great loop in the Nelson Lakes and we headed north instead of south.

We got up to Lake Rotaroa in time for our 7:00 boat ride to Sabine Hut. There is no longer a trail along the lake edge, so the 20 minute boat ride takes the place of a day’s tramp from Lake Rotoiti.

Sabine Hut is just on the lake shore, very luxurious with a beautiful setting and merciless sand flies.

Inside is pretty posh too, with a nice cooking area and better windows than most NZ homes (double glazed with insect screening). Left to right: Carrie, Susanna, Molly, Irmana. Jue is taking the photo.

We started off the next day through lush green beech forest. It was about 17 kilometers to Blue Lake hut, our destination for that night.  The trail is well maintained and all the stream crossings have bridges….except for a few that recent river flooding have re-arranged.

We walked up the Sabine river valley all day, along sparkling clear water with a startling blue tinge.  If you stop in the woods, the sand flies don’t seem to find you.

Sometimes the trees opened up to grassy river flats or we climbed over scree that had fallen down the mountain side. If there weren’t multiple avalanche warning signs, I’d say it’d be a great track for the winter.

We lunched at West Sabine hut, another flash DOC hut, and the junction with the Tearoa trail.

Just after lunch the soles on Jue’s shoes started to come loose. We stopped and tied them back on.

I practiced my map reading skills, trying to figure out how far along the valley we had come by comparing the slips and the river clearings on the map to what we could see….not that I really needed to, the trail was well marked.  I’m not a great map reader but this past year I’ve been doing rogaines with Sally, and it DOES seem to have improved my map reading skills.

Blue Lake hut is very popular. We rolled in pretty late in the afternoon thinking we’d need to pitch our tents, but were pleasantly surprised to find exactly 5 bunks unoccupied. We ditched our stuff and went for a wash in the icy stream that exits Blue Lake (no swimming allowed in the pristine lake).  The frigid dip isn’t worth the cleanliness in my book, but I succumbed to peer pressure and squashelled around, gasping but feeling quite accomplished in a clean pair of undies after emerging.  No photos of the bathing beauties survived.

Blue Lake is one of the clearest fresh bodies of water in the world. Long ago an earthquake shook down a massive jumble of rocks from the surrounding mountains and blocked off the valley just above, creating the much bigger Lake Constance. The waters of Blue Lake filter through the sediments from the lake above, and by the time they fill the little depression that is Blue Lake, they are stripped of all particulates.

Blue lake is just below; we’re climbing the earthquake dam. It made me wonder what will happen up there next time the Southern Alps fault slips.  I hope NOT to be staying at the hut that day. 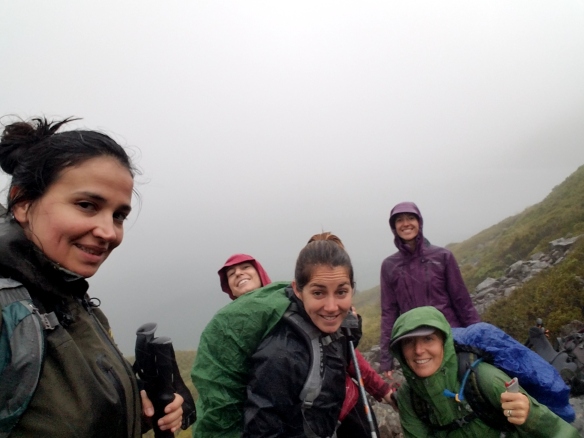 The next day it RAINED. We took a little stroll up to peak at Lake Constance under the clouds, got wet enough to feel we’d done something, then retreated to the hut again.  My macpac jacket once again failed the water proof test, grr.

View from a top bunk in the hut.

We spent the rest of the day cozily near the wood stove, playing Iota and Quiddler, and debating what tramp we’d do the next day. We feared that Jue’s shoes weren’t going to be up to the task of going over Moss Pass and down the Durville Valley, so with much reluctance we decided to walk back out the way we came in.

Still, I wanted to give Susanna the experience of a NZ mountain pass, so she and I got up early the next morning and climbed up to Moss pass. We saw a group of chamois scampering over the scree and up some cliffs, their agile babies following nimbly along. The cloud sometimes opened up behind us, and sometimes closed in as we clambered up the stream bed. We peaked into the Durville Valley–there was no hint of the expanse below us through the fog.

Blue Lake seen from above, coming down from Moss Pass.

The other three girls spent a leisurely morning at the hut (Bruce is the colorful hut warden) and set off not 30 minutes before us….still, we didn’t catch them until lunch time.

Possibly that was because we kept stopping to caress the moss….It’s irresistible, vibrant, shimmering with fresh rain.

We made it back to Sabine hut for our last night on the trail. The day we were leaving was another stellar weather day, still and clear, so Carrie and I got up early and climbed up Mt Cedric.  The tops were open before us and we pointed at Durville Valley where we had intended to come out, and lamented that we didn’t have another day to go on to Angelus Hut.

Brrr! It’s warm when climbing but chilly when we stop!

While we hiked the other girls went for another frigid swim.  Irmana’s face says it all!

Then they warmed up in their puffies!

We had planned another trip up there for next weekend, but we’ve had to flag it with the Covid19 shut down. We’ll go back….we may have all had the virus by then, or NZ may succeed in quashing it….but it’s good to remember that the mountains are still out there, relatively unchanging.

5 thoughts on “In Remembrance of Better Times”